The Wiccan Wheel of the Year

The Wiccan Wheel of the Year is a circle of time, seasons, birth, growth and death. It represents the full cycle of the seasons according to the sun. Witches celebrate Sabbats to make the passing of the seasons. These include the Equinoxes, the Winter and Summer Solstices and the days falling halfway between. The Sabbats are the holy days for witches, when the atmosphere is charged for magick, manifestation and reflection. The eight sabbats form the Wheel of the Year. 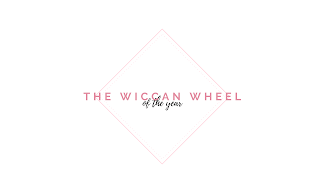 Each holiday is celebrated with a corresponding altar and ritual. Rituals and celebrations can be adapted to each witch - there is no right or wrong way to celebrate! The Wheel is also different depending on which hemisphere you live in. This particular one is for the Northern Hemisphere.
Yule - Winter Solstice December 20th-23rd
Yule represents the transition into winter, marking the longest night of the year and the beginning of the waxing year, when the Sun's light starts to increase.
Imbolc - Candlemas February 2nd
Imbolc is the first day that falls halfway between the Winter Solstice and Spring Equinox. Imbolc celebrates the approaching return of Spring and marks the Earth waking up after the slumber of winter. It celebrates the promise of new life and beginnings.
Ostara - Spring Equinox March 20th-23rd
Ostara marks the first official day of Spring, when night and day are of equal length. For witches, the spring equinox is named after the Germanic lunar goddess who gave birth to the Sun God at the Winter Solstice. Ostara is a time of balance and equilibrium.
See also: My Ostara altar for 2022
Beltane - May Day April 30th-May 1st
May Day - which begins on the evening before - falls between the Spring Equinox and the Summer Solstice. Beltane is a holiday of fire and fertility, which marks the approach of Summer and the sensuality that the returning sun brings with it. Beltane represents sexuality and the eternal cycle of sacrifice and rebirth needed for the continuation of life. 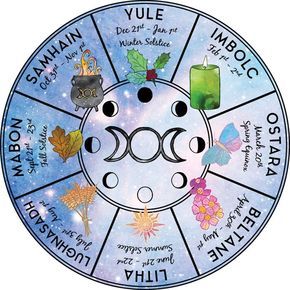 Litha - Summer Solstice/Midsummer June 20th-23rd
Midsummer is the longest day of the year and the shortest night. It's also the beginning of the waning season. Today is the energetic climax of the year, where the Sun is at his peak. It's time to celebrate all we've accomplished over the last six months.
Lammas - August 1st
Lammas - also known as Lughnasadh which is named acfer the Celtic Sun godx Lugh - is the first of three harvest holidays, marking the beginning of the harvest season. The day is celebrated with feasting, games and song. Our spirits begin to shift and we prepare for the autumn.
Mabon - Autumn Equinox September 20th-23rd
The first day of autumn! Autumn is a time of balance. Night and day are of equal length and the harvest is complete. We look forward to the impending winter as a time of death, rebirth and transformation. It's a day of being grateful and giving thanks.
Samhain - New Year October 31st
The Wheel of The Year has turned full circle and its now the wiccan New year - and Halloween! Samhain celebrates everything we've accomplished and allows us to do so alongside our ancestors. It's time to honour our deceased loved ones and celebrate their lives. Balance is everything to the witch and at this time of year we celebrate the circle of life.
And that is the Wiccan wheel of the year! The dates of the sabbats change over the years based on the sun cycle but I hope this post has been helpful and I look forward to posting more about the Sabbats!
Blessed be,
Saph x
Labels: Wicca