Pregnancy was really tough for me and I'm not sure how I would have coped without my essentials! 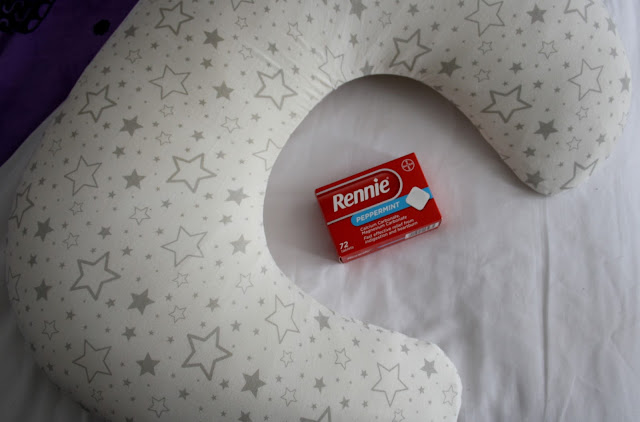 Mints and Chewing Gum
Mints helped me so much during the first trimester and a fair amount of the second, for both nausea and acid reflux. I see a lot of ladies that don't want to take Gaviscon while pregnant and I certainly didn't (it's bloody gross) so Foxes Glacier Mints and Trebor/Mentos soft mints and peppermint chewing gum often came to the rescue for me.

Gaviscon and Rennie
When the mints just weren't good enough, Gaviscon liquid or peppermint Rennie were my next choice. I didn't start using Rennie until week 28 and my God were they a lifesaver. Any hint of acid reflux and I chewed a couple of those and it was gone. They tasted better than Gaviscon as well so that was a bonus. Towards the end of my pregnancy I was going through Rennie like sweets; and eventually bought a 72 pack rather than keep wasting money on the 24! Just as well really, as I also  had to keep sharing them. Also if you're not aware: you can get Rennie in Poundland! Save yourself a few quid and stock up there!

Pads
I was quite upset by this one to be honest. When I discovered I was pregnant I was like 'yess, I don't have to wear pads anymore!' they irritate the crap out of me (I really need to switch to cloth pads) so I packed them all away in a drawer for nine months time. But then the discharge happened. And I was like 'well, fuck.' If you didn't know, discharge seems to double the amount while you're pregnant, so yes, you absolutely will need to wear some form of pad or something to collect it.

Green Tea
Taylors strawberry and vanilla Green tea with two sugars (for me personally) were also really good for nausea during the first trimester. But only a small cup, as I found having a mugs worth still made me feel sick.

Meat
Another one I'm upset by. For those of you who don't know, I was a vegetarian before I got pregnant. But, during early pregnancy, if I didn't get a substantial amount of meat into my system I would totally flake and almost pass out. Although, there was one day I remember that I didn't have any meat and was totally fine. Fish didn't quite seem to work the same way. This seemed to ease off towards the end of the pregnancy though, and I found that I could easily get through the day without meat.

Fizzy drinks
I know you're meant to cut out caffeine while you're pregnant but I don't think I would have survived it without my Coca-Cola. I didn't drink it every day but sometimes I craved it, and needed it for the extra sugar boost when I was feeling knackered.

Fresh air
Goes without saying really but when I was having my funny turns and felt close to fainting, getting outside or even just sticking my face out the window helped a ton. Although in April some of my funny turns happened when I was already outside, so I just had to sit down, sharpish.

Hair removal cream
For when I just couldn't reach - or see! - to shave anymore.

A shower stool
There were certain days during the third trimester where I just really could not stand for long periods of time, so I got through showering by sitting on the shower stool to wash my hair. Having the stool made so much difference, and once I was done washing the shampoo out, I would just take the stool out of the shower and continue washing. Before I thought about using the stool - we already had one as Mum bought it for Dad when he was getting weaker - I would just sit on the floor of the shower, but then I couldn't reach my shelf, and trying to get back up was a bit precarious! I definitely recommend getting a stool if you find yourself getting lethargic easily - pregnant or not!

Comfi-Mum Feeding Pillow
This was an absolute life saver for me. I didn't get it until the third trimester, and only planned on using it for feeds, but I was so uncomfortable most of the time, that I ended up unwrapping it early. What a godsend. It's memory foam so it's kind of hard but a comfortable hard, and I literally took it with me everywhere. I even slept with it most nights. I have no idea how much feeding pillows are anywhere else but I got mine from Smyths toy store for £19.99 and I absolutely love it.

Trainers & Slip-on Shoes
Towards the end of my pregnancy my feet were so swollen that I literally couldn't fit into most of my shoes! This meant I could only wear trainers with everything and it really bothered me; wearing a nice outfit and then ruining it with trainers ugh. Eventually I ended up buying myself a pair of snake-skin effect black slip-ons from Primark for a fiver. Best £5 I ever spent, they were so comfortable, easy to get on and just dressy enough for my nice Summer outfits. Plus the trainers were still good for the cooler days when I could get away with wearing a "slobbier" outfit.

What were some of your essentials? Will you be adding any of these to your list?
Labels: Baby Diaries