Week two of 40 New Things! If you haven't read week one yet, catch up here. 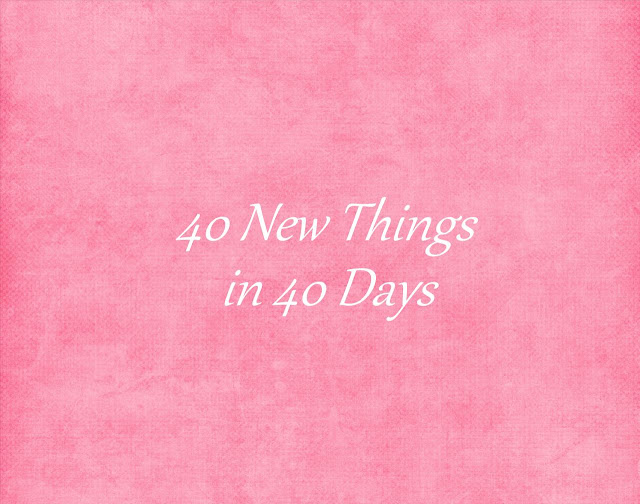 Day Eight: Charity Walk
My cousin set up a charity walk in aid of Save The Children UK and again, I was hesitant to go. But, I love a good walk, and especially one for charity, and signed up after a couple of days of thinking about it. It wasn't a particularly long walk, but I was knackered once I'd walked home too. I ended up 3 blisters on the same foot! But Charlie loves being in his pram, so didn't complain, and he especially loved his time on the swing. The weather wasn't great and hardly anyone turned up but I'm glad I can say I did it, supported my cousin and got some exercise in. Overall, it was a pretty good day! Charlie even got a 'I'm a muddy puddle walker!' sticker. Day Nine: Stitched Up
Day nine was meant to be date day. However, I came down with Charlie's nasty cold the day before so my date kindly insisted that we reschedule for when I was better. THANK GOD. I had no idea what I was going to do in place of my date. I felt rotten, had tons of blogging to do and didn't want to leave the house. But I still wanted to do something I wouldn't usually, or hadn't recently. But what? 8pm it finally hit me. I've been wanting to sew something for weeks.

I haven't sewed anything since last Christmas, when I made the stuffed animals for our tree some felt Christmas cracker party hats (I know, right?) and a bear a waistcoat. I was dying to do it again, and I remembered that I actually had a jumpsuit that needed repairing. Mum was going to do it for me, but instead I asked her to show me how to mend it! 10 minutes later and a lot of 'I don't know what I'm doing' my jumpsuit was mended and I was feeling pretty proud of myself. I wanted to take before and after photos but my phone had died and Mum didn't have hers on her. Boo.

Day 10: Not a Damn Thing
I was still feeling pretty rotten with my cold, and the weather was absolutely horrendous, so I really didn't feel like doing much at all. So I didn't. Charlie went for a nap about 12pm, and I decided to join him. Although I couldn't actually get to sleep, so I spent 2 hours (he napped for 2 hours?!) on Pinterest, which I hadn't done for a long time. I loved it. I kind of wish I had spent the time more productively but at the end of the day, I was ill and wanted to rest. Plus, I had technically done two new things the day before...Gail and I have decided we're going on holiday together this year! To make it even more exciting/spontaneous/nerve-wracking, we're going to use srprsme, which pick your destination for you, and keeps it a surprise right up until the last minute. I'm one of those people who need to know everything at least a day in advance, so the fact I've agreed to do this is HUGE. I just hope we get somewhere incredible.

Day 11: Tried Green Cola
I was lucky enough to receive a free 24 pack of Green Cola. To know what I thought of it, read my review here.

Day 12: I Messed Up
I totally forgot about my challenge! I'm writing this on day 14 and I honestly can't even remember what I got up to, and I certainly didn't do anything new! I'm a bit gutted really, just a standard day for me.

Day 13: Went on a Ramble
Ash came over and it was a beautiful day, so instead of wasting it inside, we took Charlie out for a walk in the pram. We didn't set a route and just kind of walked without really thinking about it. We didn't really go too far from home, but we were out for a while. I hoped that Charlie would nap but he was too excited. We turned the chassis around so he was facing outwards and he was laughing and chatting away to himself for ages, it was adorable! Ash usually comes over when I need to do Charlie's food and formula shop for the week, so it was really nice to actually just be out in the fresh air and not worry about responsibilities for a while.

Day 14 of my 40 new things challenge was also day 4 of my Minimalism and Simplicity challenge, which meant I had to leave my phone alone for a while before I went to bed. The aim was to get an early night. My phone was nearly dead so around 10pm I put it on charge, turned the WiFi off and meditated. I was hoping to meditate myself to sleep but to be honest, without any music to listen to (I really need to charge my ipod) it was quite hard to stay relaxed. I think I stayed off my phone for around 40 minutes before I gave up and watched Drag Race. I got to sleep around 1am. FAIL.

Labels: Life After a Hysterectomy Lifestyle