My hysterectomy is a huge part of my life. It doesn't affect my day-to-day life but there's definitely some things I need to consider in the future, and some of you on Twitter had some questions about it. 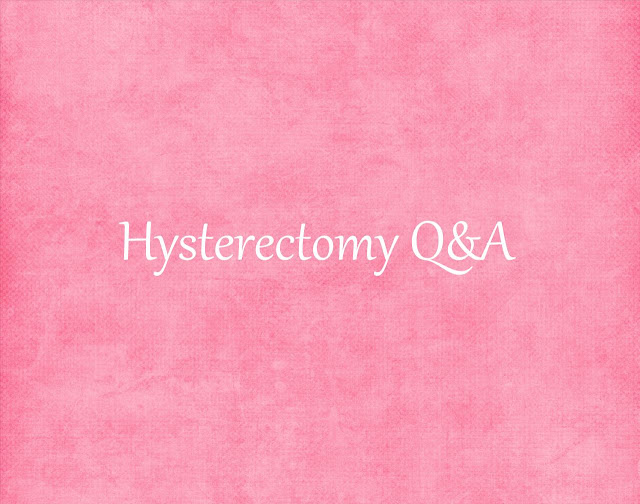 Do you still get PMS-like symptoms or has menopause kicked in?? Keep reading conflicting things about happens to your body afterwards. - @katmariabg
Menopause hasn't kicked in yet but I have read that I have up to 4 years (5 at the time) before it begins. I do still get PMS symptoms though. I can feel when I'm ovulating, which I couldn't before, so it took me months to realise that's what the pain was! I also get pretty bitchy and irritable, as I did when I had my period.

What was the first thing that popped into your head when you were told what was going on/happening? - @QueenSapphireUK
Honestly my initial reaction was 'oh, okay.' hahah! I immediately got a 'is that it?!' from Ash because he'd been crapping himself about how I'd react to the news, but it's like I said at the time, they did what they had to do, there's nothing I can do about it, what's the point in getting angry or upset? Obviously I have been angry and upset since, but I think that because it was a lot to take in, initially I just accepted it. It really took almost a week for it to sink in I think, and I ended up crying about how nobody is going to want me because I can't have their kids etc. Honestly that does still worry me but I currently can't stand the thought of having another baby anyway so good riddance!

How does it FEEL? @LixHewett
Where do I start? Recovery was bloody hard. I could barely walk and couldn't stand up straight for about two weeks, and had to take ibuprofen and paracetamol to feel even a tiny bit normal. The smallest amount of pressure felt like a ton of bricks so trying to nurse an 8lb baby wasn't the most comfortable thing in the world. It takes about six weeks to recover from a hysterectomy though and I recovered after four. Nine months later I'm still numb from my belly button to the top of my vulva (tmi?) but it gets less numb every month.
I can't actually feel that there's anything missing inside, and I can barely even tell that I have a scar. It's definitely not the most pleasant feeling ever, but lots of rest with a little walking, and you'll recover in no time.

I hope that this has been insightful or helpful, and if anyone else has any other burning questions, please feel free to get in touch!

Labels: Life After a Hysterectomy