Another month, another budget! I'm changing it up slightly this month though. I always get paid on the 28th of the month, and I usually start my budget on the 1st of the month until the following pay day. I'm going to do it slightly differently this month though and actually budget from the 28th April-28th May. April brought a pay rise by a whole £1.08 but it also came with some sick days. I had no idea how much I was going to be paid but I wasn't expecting much. I really had to think hard about my budget this month! 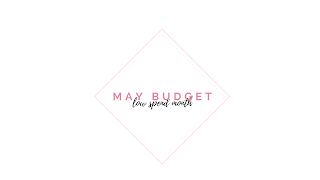 I already had £483.11 in my bank account and my pay was £1197.20 which is only roughly £200 less than usual! Every month I get paid, the first thing I do is pay my rent and put a little money into my savings accounts so I know exactly how much I have to cover bills and any occasions I need to buy for.

Opening balance: £1680.31
Bills
I have decided not to include some of my bills in this months budget as they come out of a separate bank account and I rarely need to transfer my wages across to it to cover them.
Rent: £80
Phone: £24
Barclays Blue Rewards: £5
Prime Music: £7.99
Also I know last month I decided against paying for Prime Music but actually, I was missing out on some music I love so...don't judge me?
Savings
General: £50
Christmas: £50
So with rent, direct debits and savings paid through straight away I was down to £1462.32 for the rest of the month to budget with.
Cash or Card?
I think I'm going to forget about the cash budget this month. I don't really seem to save much money by using cash, as I still make multiple online orders. I can't believe I went through £300 cash as well as a few hundred on my card! Although my cash binder is filling up nicely from the leftover cash, so I am doing a bit of saving there.
Birthdays
I have two friends birthdays and my managers birthday this month. Work does a collection for birthdays so I'll probably put in £5-£10 per person. As I said above, I have some cash left over from my previous cash budgeting months so I will use cash from my binder to pay for those three birthdays at least.
I also have 3 family birthdays in early June to buy for and I usually spend at least £20 on my nieces so this will probably be a card expense. (£60)
I also want to try and pay for Charlie's birthday party this month so I'm looking at around £240 just for family birthdays. That being said, I do now have a credit card so I will potentially use that to pay it off as my income was slightly lower this month!
Groceries & Toiletries
I still have around £7 left on a gift card with ASDA so I will probably get myself some frozen ready meals for work with that so it's more cost effective in the long run. I also get my deodorant from ASDA which costs me £3. I also need to get myself some new vitamins but I'm not sure where I'll get them from yet! As for snacks, fruit and food for Charlie's lunch boxes I think I will start going to Aldi as I can get so much more for my money there, instead of going to ASDA for convenience. I think I will give myself a budget of £20 a week for food.
Clothes & Shoes?
Now in theory I shouldn't need to buy myself or Charlie any more clothes but I am also planning another decluttering session for both of our wardrobes so who knows what I'll end up needing to replace! I do however desperately need some new earrings so I do have a jewellery budget! I'm not sure how much I'll spend on jewellery though.
Takeaways
I'm banning myself from takeaways! To be fair I have had less last month as I didn't have the apps on my phone, but on my days off from work I did tend to order on my laptop. Oops. But unless I'm physically going to McDonald's or Nandos or wherever, it's a no from me.
Overall Budget
So with the basics hashed out, I'm looking at spending £470 on my debit card which will leave me with £1210.31 and £180 on my credit card. Wow, that'll sure be impressive if I stick with that, won't it?? Knowing me I won't so once again, I'm going to aim to not go under £600 in my account and not spend more than £250 on my credit card. Wish me luck?
Until next time,
Saph x
Labels: My Minimalism Journey