I love tattoos. I love the way we can cover ourselves in art, in whatever way we choose to and how much confidence they can bring. I personally only have four tattoos, but I plan to get many more.

My first tattoo was a scorpion on my neck. I wanted it since I was 16, and went through many different designs before I finally settled on one at 19/20 years old. I didn't actually go to a shop, but rather to a family friends son. He is fully trained etc. no worries there! I had no idea what to expect pain-wise but actually, it barely bothered me at all! The worst bit was colouring in the stinger, as the ink wouldn't take at first, so that took a few goes. But, Mike confidently said that I 'took it like a champ' so that made me feel much better. I still absolutely adore my scorpion, though I can't actually see it, it makes me very happy to know that it's there. I chose the scorpion for a few reasons
1. My star sign is Scorpio
2. I genuinely love scorpions
My second and third tattoos I got on a whim, as I was visiting a tattooist anyway. Though it was a spur-of-the-moment decision, I had actually been wanting them done for at least a year. I actually kinda of got them as a celebration of leaving my shitty job that left me depressed and severely anxious. These are my thumb tattoos! I have a crescent moon on my left thumb, and a pentacle on my right. However, I absolutely hate them. 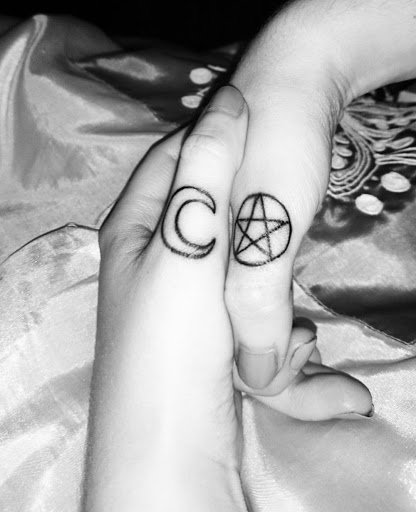 Well, I hate the pentacle most but my moon isn't great either. They've both "blown" in places, and the circle for my pentacle is so wonky it makes me want to cry. I plan to get my pentacle covered later in the year, and possibly get something done to my moon to make it look a little nicer. I am absolutely dreading it though, it hurt like hell and if I didn't hate them so much, I wouldn't get them done again. Props to anyone who has all their fingers tattoo'd, because fuck that. I actually chose these because at the time, I was really into learning about Wicca, with the intention of being a practising Wicca, and I really wanted something to represent that.
Last but not least, tattoo number four. This is probably my favourite of my three good tattoos, as it's so pretty and has a real meaning to it. I got the hedgehog in flowers as a memorial tattoo for my Dad. I grew up with him being called Hedgehog by Mum (still don't actually know why) and he really loved gardening, so it just seemed like the obvious choice. I love it because not only does it remind me of Dad, but because it's also my prettiest and most feminine tattoo - and reminds me how much I've changed over the years! 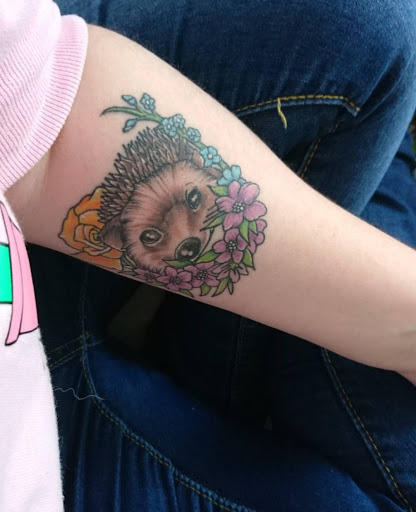 Plans for Future Tattoos & What I Don't Want
As I said previously, I'm looking to get my pentacle tattoo covered, probably with some sort of flower. I also want something done to my moon, and I'm leaning towards getting some dotwork done, or possibly a geometric pattern. I really don't know, I may just do a walk-in session and discuss some options.

I really want to turn my Hedgie into a half sleeve. I plan on adding a fox, a whole bunch of flowers and a butterfly. I'm also considering a bee and a ladybird but I'm not 100% sure on that yet.
I also really really want a sternum tattoo one day, but I don't have any real ideas for that yet. I just know I want one. I would also like to get my leg(s) covered, but again, I don't have any specific theme in mind. At one point I planed a Japanese theme, and then a mermaid/under the sea theme but I don't want either of those anymore! The only thing I've really decided is that I don't want any more black and grey tattoos, I definitely want to stick to colour tattoos. I also don't plan to get any names, dates, lyrics or quotes. I don't know why, but they just don't appeal to me.
It's frustrating not having a real idea of what I want tattoo-wise, but I think it's just as well, as I can't afford them anyway! I'm still waiting for a quote for my thumb tattoo cover-up, but I'm also saving up in preparation (I'm sure you've noticed the influx of partnered posts on my blog). My original thumb tattoos cost £30 for both, but for some reason I'm expecting to pay around £20 more. I don't know if I'm massively overthinking it, but it's better to be over-prepared than under!
Labels: Lifestyle