I know I say this every time but WHERE HAS MY TINY BABY GONE?! My little boy is nine months old already and it won't be long before it's his first birthday. I genuinely want to cry. 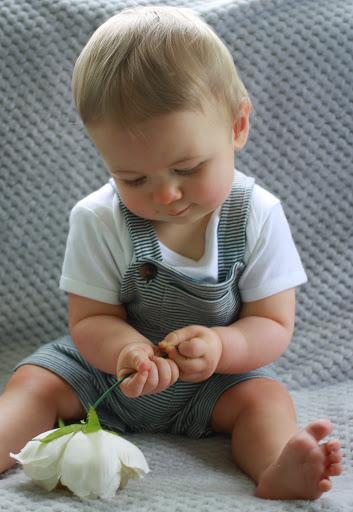 At around six and a half months, Charlie was sat in his cot and managed to pull himself up onto his knees. After that, I made sure to lower the cot, and it's just as well I did because exactly a month later, he pulled himself up onto his feet! Then the fun really started.

Just before he turned seven months, Charlie started crawling. I couldn't believe it. He'd sort of been making an effort to get moving, but not very hard, and then one day he was off! He dragged himself around rather than crawled on his hands and knees and it was so funny to watch. Now I can't turn my back for a second. In the same week he started babbling Mumumumumumum constantly. He'd been saying it for a good few months already, but only when he cried, so it was great to hear him say it without crying! It did start to grate after a few days though; it was literally constant. 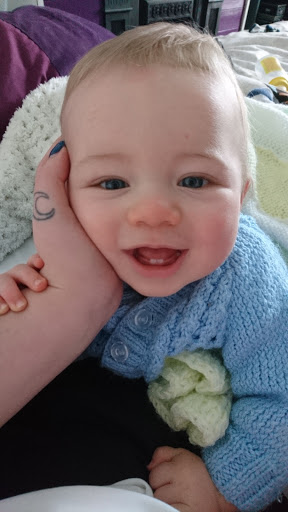 Around the same time he learned to poke his tongue out and blow raspberries! Sometimes it seems like a rude response to something that was said but it's cute 100% of the time. Then a few weeks later he started smacking his lips together when he saw food or wanted water. At seven and a half months, Charlie started to change the way he crawled. Every other time he was on the floor, he'd get onto his knees. He'd only stay like that for a few seconds though - he couldn't quite work out what to do next and ended up going back to commando crawling.

I'm pretty sure I've mentioned it before but when Charlie does his gorgeous big grin, he also screws up his nose! He started grinning away like crazy at seven months and it was so great to see. Plus he gets it from his Mama so obviously I love it even more.

The eighth month sleep regression made me want to die. I didn't even know it was a thing until we were three days in. He just didn't want to sleep and I always rely on his naps to get anything done! Charlie rarely sits and plays by himself and when he does, it's usually only for five minutes - if that! The first day he literally only had one hour long nap in the afternoon and I was crying by 6pm. Complete nightmare.

His sleep seemed to yo-yo all the time after that. One day he'd be back into a routine and nap 3 times before bedtime, the next day he'd have one nap all day and be up until 10pm. That was a fun game. 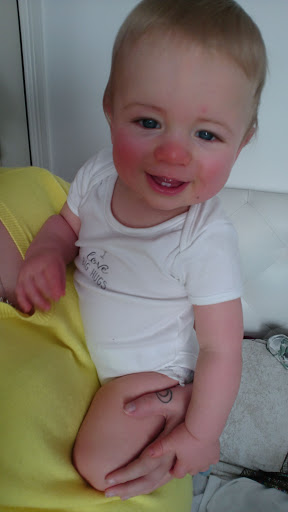 He also made an attempt to spoon feed himself a few times and didn't do too bad a job to be honest! He even dipped the spoon into his bowl and it was adorable. I also gave him some more solids to play with! The first night he had some broccoli. He kept making 'yummm' noises but also cringed every time he had some in his mouth sooo, yeah. The next night I gave him jelly and he had a right laugh with that. I don't think he ate very much but he loved making it wobble before he smushed it to pieces. He actually stole and ate chips off my plate the same night. So. Bloody. Rude. I'm still a bit hesitant to give him proper solids, as he tends to choke on his snacks a lot, but he's finally getting used to more textured purees, rather than just purely smooth ones. 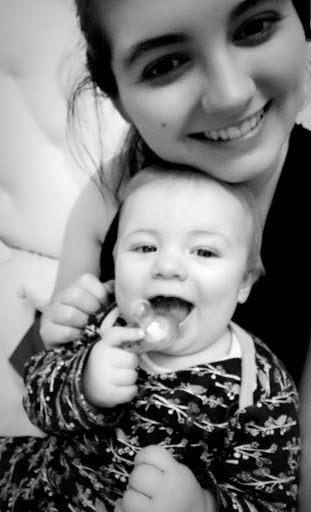 I know I just said that Charlie doesn't play by himself for longer than 5 minutes but even that changed this month! We moved his ball pit downstairs and now he's more than happy to chuck the balls out of it and chase them around the front room for ages! He also finally cut his two top teeth! He hadn't cut any since he was five months so I was pleased to finally see some more teeth come through! Although he was still chewing on his fingers and crying a lot, so he's obviously not getting a break this time. Hopefully it won't be so long before these next ones cut but I can't even see which ones are coming. 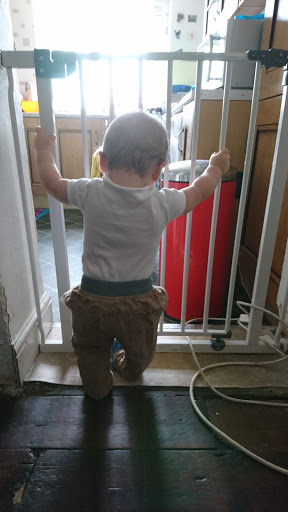 Charlie loves being on his feet. He's constantly pulling himself up and he's proud as anything every time. He even started walking while holding onto things! I did not expect that at 8 months. I once caught him thinking about freestanding but he wimped out. Probably for the best, as he was still quite unsteady on his feet! Also, if he gets the chance, he will grab hold of your hands and force you into walking with him. He even runs sometimes. It's cute as hell but killer on your back! Just last week he finally figured out he can do that with his walkers, but he'd still rather hold your hands! He even walks up and down the stairs. Probably not something we should have encouraged but he loves it. He doesn't even always put both feet on one step, right foot on one step, left foot on the next. He's crazy! I won't even mention how much of a strop he gets into if you stop walking. Halfway through April he started to walk around his cot, still holding on, and the realisation that he's becoming a toddler really started to kick in. Part of me is a proud Mama but I mostly just want to cry because my tiny baby disappeared so quickly!

He still wasn't QUITE sleeping through the night by eight months. But he was sleeping in his cot! I still hadn't figured out how to get him to settle in his cot to start with, but the fact he actually slept in his cot once I got him in it was great. Especially for me, no baby feet in my back, or worrying about him rolling off my bed. After a few days of trying, I did actually manage to get Charlie to settle in his cot! Teething pain made it more difficult than it perhaps would have been, but it was definitely off to a good start. He doesn't like being in his cot after 5am though. I wouldn't mind but he wakes me up by hitting/scratching/pulling my hair! So I'm definitely looking forward to him sleeping through the night. 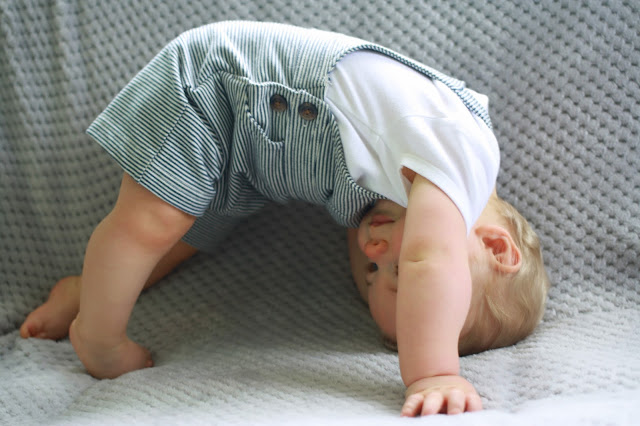 I taught him how to do roly polys. He got into the habit of putting his head down and then bringing his bum up to stand on his hands and feet (pictured above) and after a few weeks of it I just grabbed his legs and rolled him over. He thought it was hilarious. Also, head/handstands are great fun. I definitely think he's going to be a gymnast. After a few days of me rolling him, he attempted it himself! He didn't make it, and flopped onto his side but he definitely attempted it! He's so determined. I hope that determination stays with him in his life.

He still rocks. If he's happy or hears a little tune he likes, he still rocks back and forth and I still love it. He also finally learnt how and when to say 'ahhhh/aww' and it was the most precious thing! One morning he just woke up (in my bed), gave me a cuddle, pressed his face to my cheek (how he gives kisses) and went 'ahhhh!' SO. CUTE. He had previously done a little 'ahh' when he attempted to stroke our dog Tarja, but he did that to me about ten times throughout the one day! He was obviously in a very loving mood that day. 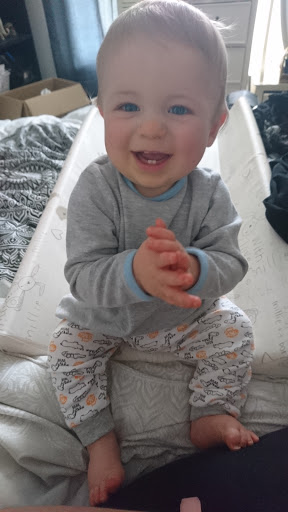 Charlie has also started to clap again in the last couple of weeks. He's done it before, months ago, but I've noticed that he'll learn a new thing, and then stop doing it for a while. I don't know how he remembered to clap but he woke up from a nap one day and just clapped for a solid five minutes! He's been doing it every day since. 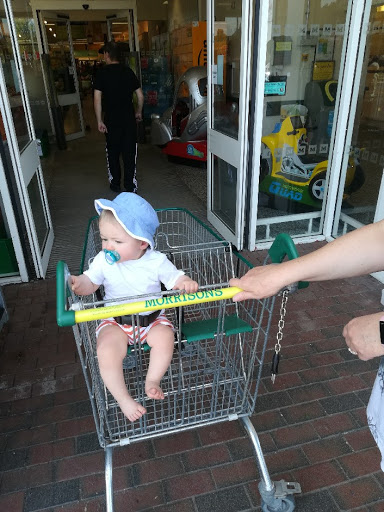 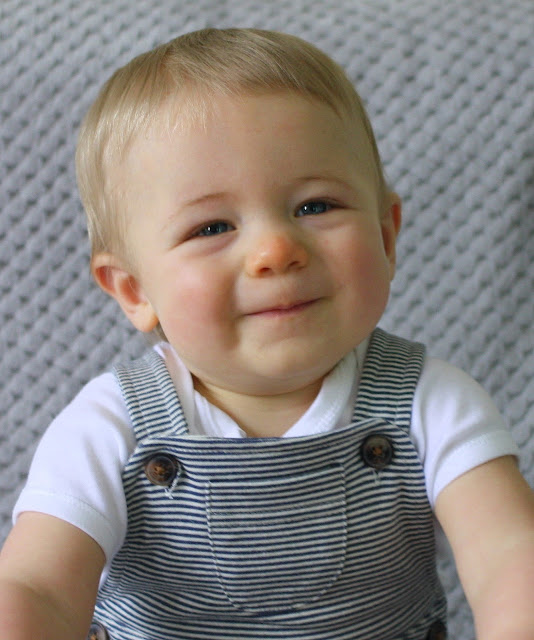 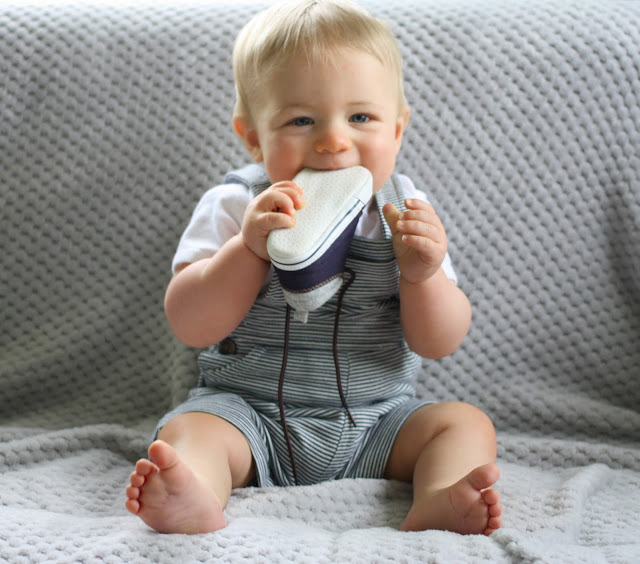 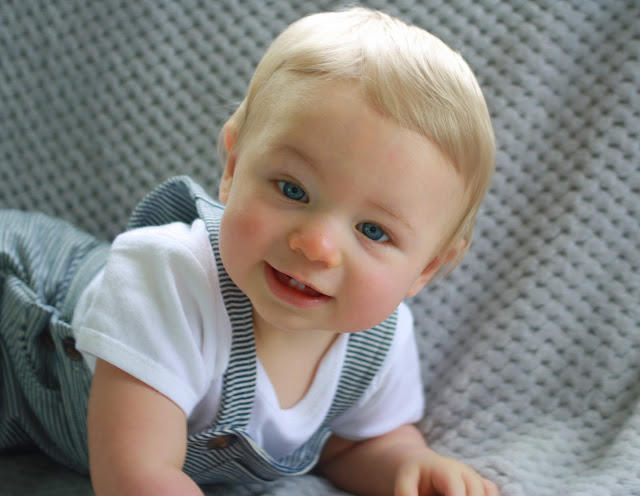 I'm so proud of my beautiful boy. He's so clever, determined, and a fast learner. I'm thinking he's going to be walking by his first birthday, and talking not long after. He does frustrate me at times but I literally feel like the luckiest Mama on Earth sometimes. I love him more than anything.
Labels: Baby Diaries