I majorly overspent in March so April is the time for a budget overhaul. Payday brought in £1,235.88 for April and I'm aiming to save as much as possible. I have noticed that I'm usually left with between £200-£400 by the end of the month which actually is pretty reasonable, but I'd love to be able to keep more in my current account this month. That being said, I am starting to plan Charlie's birthday party this month, which isn't going to be cheap. 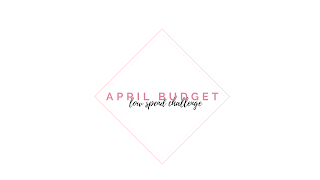 Netflix £4.99 (£9.99 but my stepdad pays half)
Phone £24
Amazon Photos £1.49
I nearly paid out £79 for a years subscription of Amazon Music Unlimited but I decided against it. I don't even pay for it monthly now, so although it's annoying not being able to listen to every song I want to, it's not a necessity. I was tempted to cancel my prime subscription as I barely order through Amazon now, but the other benefits are too good to get rid of!
Cash Budget
I really missed using cash in March so for April I decided to withdraw £300. After doing some grocery shopping and booking Charlie into football club for the Easter break I'm now left with £866 in my account. Hopefully I'll keep the majority of it this time!
I have two birthdays to buy for this month, my Mums and my nephew. I'm going to try and avoid online shopping and try to get out and buy their gifts. I don't really have a budget in mind though, I have no idea what to buy them!
I do also desperately need new bras but other than that, I need to try really hard to not buy new clothes. If I do feel the need to buy clothes I think I will try secondhand shopping this month though, as I am starting to feel like my Spring/Summer wardrobe is non-existent and Josh loves going to the charity shops with me.
Gift Vouchers
I still have some gift vouchers left over to use!
£20 HM voucher
£10 Amazon voucher
£7 ASDA voucher - it was £30 but I spent £22 towards the end of March
What's your budget for April?
Until next time,
Saph x
Labels: My Minimalism Journey