A few months ago I started following various authors on Twitter. One of those authors was Alex R Carver. Out of all the authors I followed, Alex stuck out to me most. He's very real, down to earth and very honest about his life and work. So I decided it was time to check out his books. 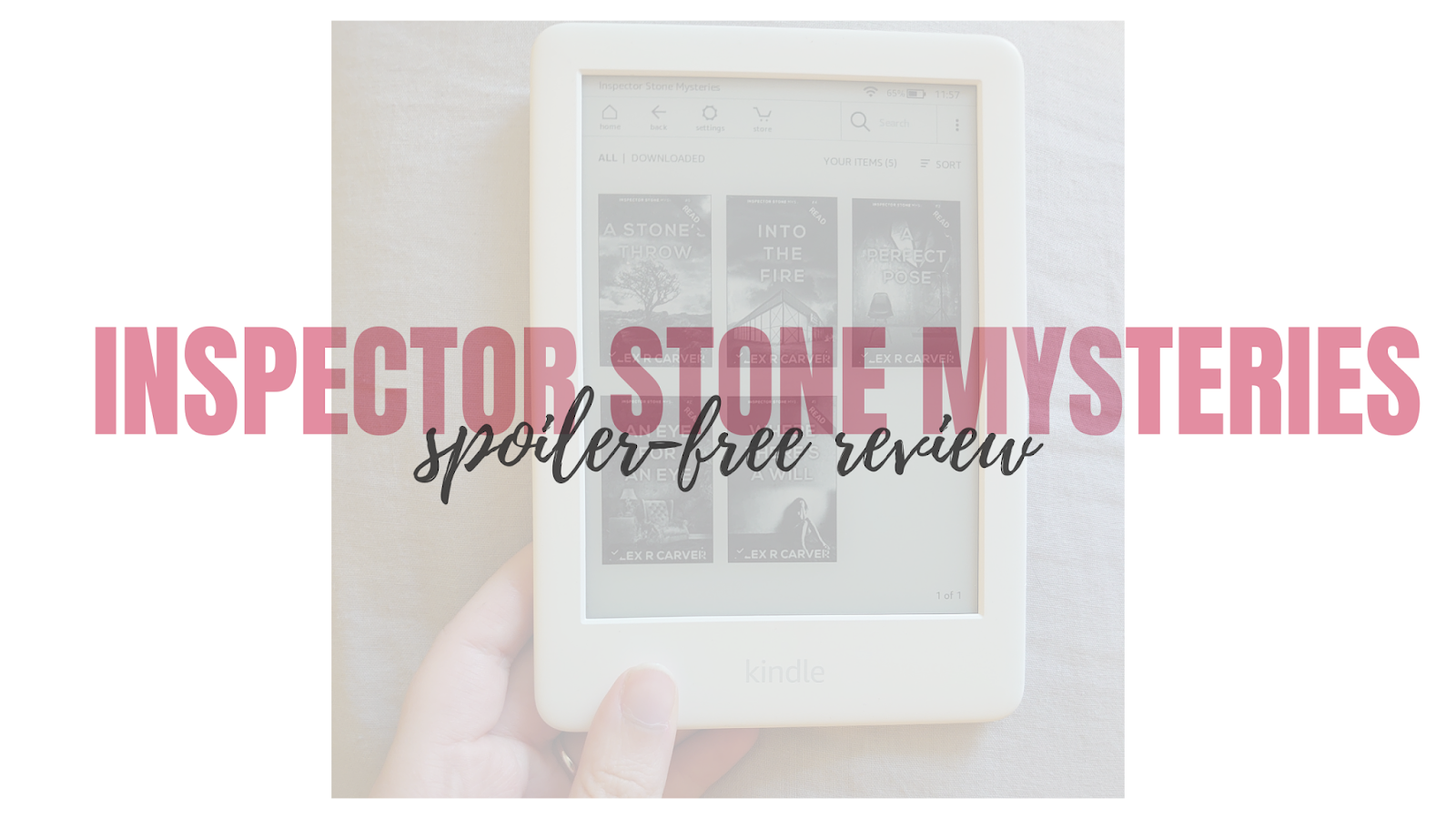 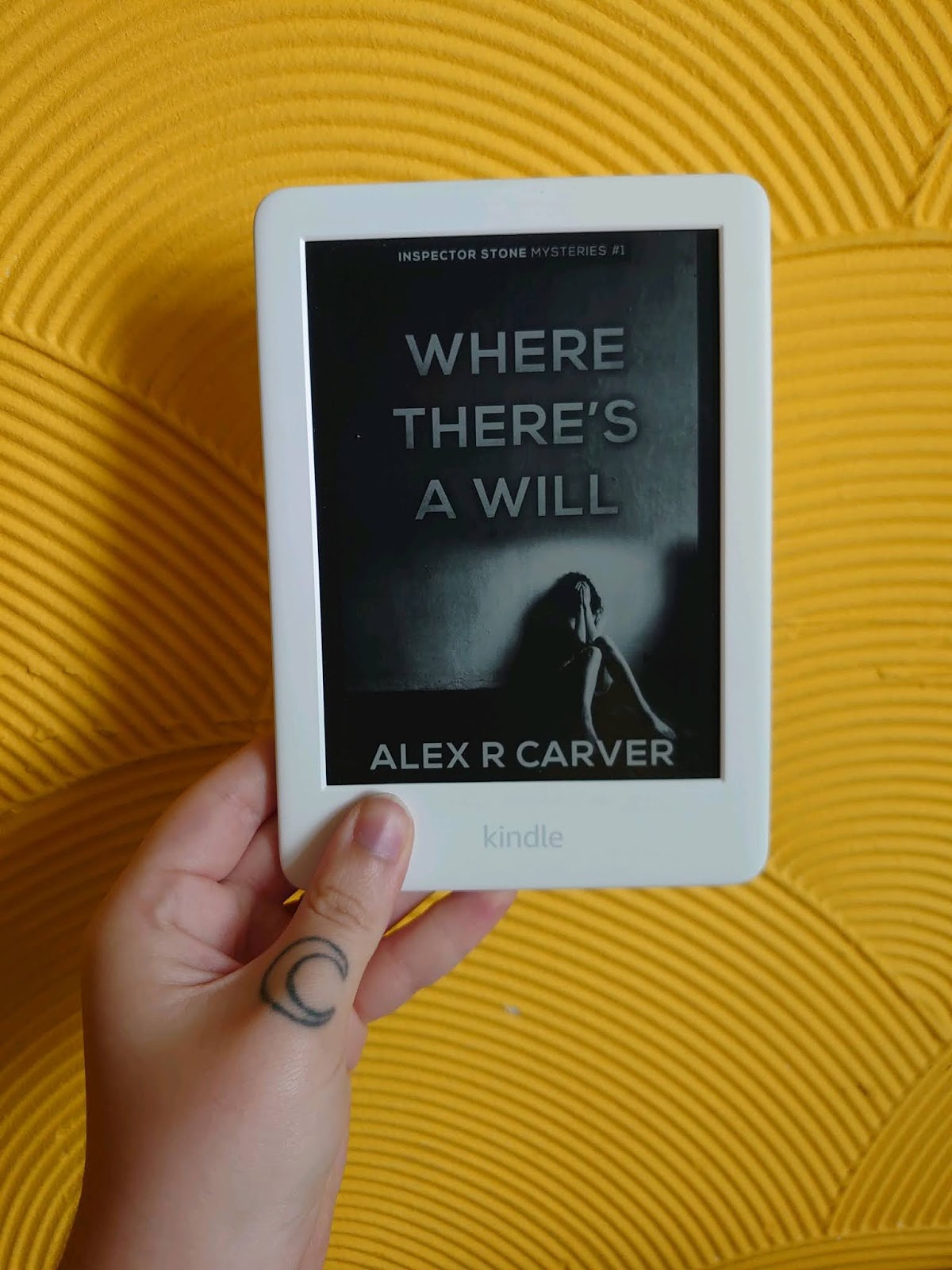 I immediately fell in love with Alex's writing. I had been in a bit of a reading slump until I started Where There's a Will. I found this book so easy to read and get into, I literally didn't want to put it down! I also fell in love with Inspector Nathan Stone. I often find that Detective Inspectors are overly gruff, grumpy men who hate everyone and everything. Sure, he's still as knackered as any other DI but Stone was a breath of fresh air for me.
Although I personally don't like to read the blurbs of books - mostly just before I read the book, to avoid spoilers - I have included one for each book. Although I have taken out a sentence here and there to take away some spoilers! Trust me, you'll be glad I didn't include them if you decide to read the books!
"The kidnapping of a child is every parent's worst nightmare, for the Keatings though it isn't a nightmare, it's a reality.
Inspector Stone is tasked with finding Alice Keating and bringing her home safely. Hard enough under normal circumstances, but between investigating an unrelated armed robbery, family problems, and the machinations of an ambitious underling, it's almost impossible.
Unbeknown to either Stone or Alice's parents, the kidnappers have more in mind than collecting a ransom. And when it turns out that the Russian Mafia might be involved in the kidnapping, things begin to spiral out of Stone's control.
Can Stone find Alice before the kidnappers make good on their threats? If not it won't just be Alice that becomes a victim to their deadly plans..."
As soon as I finished Where There's a Will, I was begging Josh to buy me the rest of the series! Thankfully he didn't take much convincing. As soon as those babies downloaded I started reading book two!
An Eye For An Eye
Oh, my god. As with most things, books rarely get better after the first (in my opinion) but this one really did! This one literally had me hooked on the first sentence. An Eye For An Eye is a wild ride and by the end of it, had me sobbing. 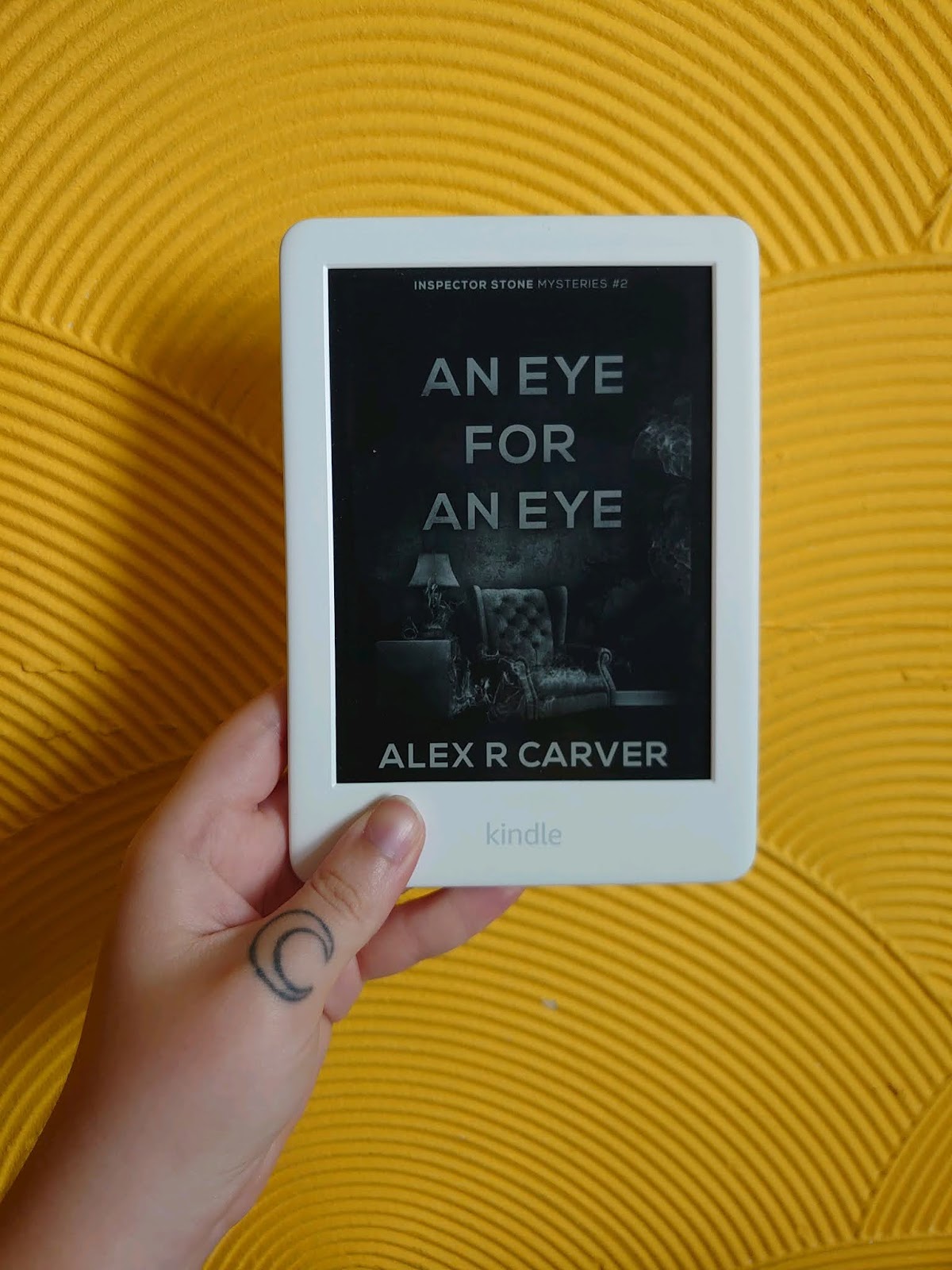 "Revenge comes to Branton.
Inspector Stone's past catches up to him with blood and flames.
A series of murders rocks the small town of Branton and leaves Inspector Stone with his toughest case, one which may see him paying a tremendous personal price if he can’t solve it quick enough.
At first glance the murder of the wife and mother of an Asian shopkeeper appears racially motivated, and the local paper is quick to stir up tensions within the community.
Another murder, this time the husband of a local barrister, an attack on a trio of teens, and the discovery of a previously unreported murder all lead Stone to the conclusion that something more than racism is at work.
Before he can work out what connects these seemingly unrelated events he is distracted by the most tragic of events.
Can Stone and his partner pull themselves together long enough to figure out who is responsible for bringing terror to the streets of Branton, or will the killer complete his fiendish plan and make good his escape?"
I took a break from reading the Inspector Stone Mysteries for a couple months. Not because I wasn't enjoying them, but because I didn't want them to finish too soon! Plus I needed time to recover from the emotional turmoil from book two. Roll on April and I decided it was time to pick up A Perfect Pose. 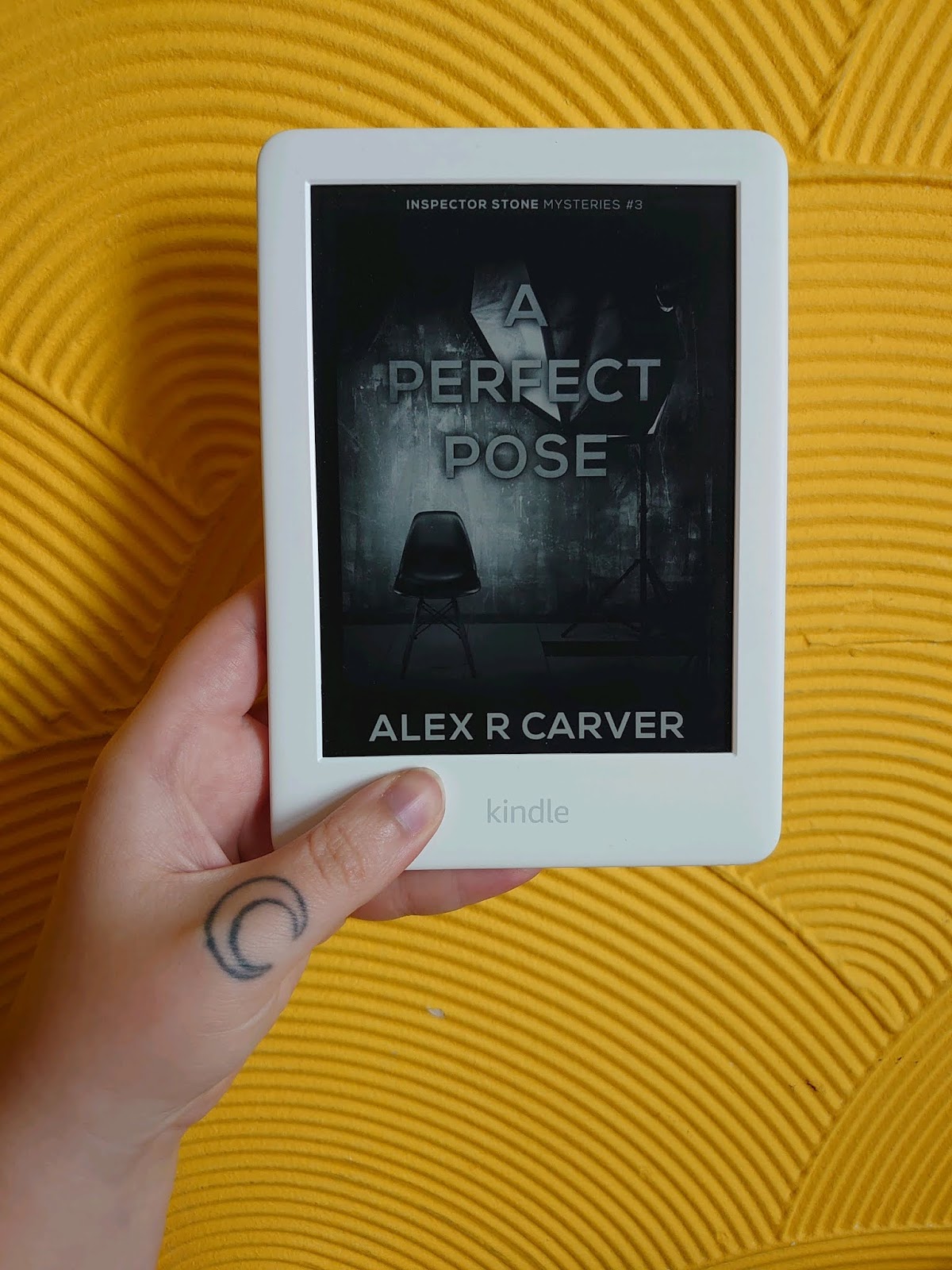 A Perfect Pose didn't immediately grip me like An Eye for An Eye did but it didn't take long! I was probably less than halfway through chapter one before it started getting juicy! I felt like a teenager again, waiting for the gossip my friends were about to tell me about. Draa-maa! Please note, I have removed two sentences from the following blurb to avoid a spoiler!
"A dead model, a studio suspected of abuse, and a depressed detective.
The discovery of a teenage girl's body on the riverbank draws Nathan Stone back to work and into a complicated case.
Ellen Powers was a popular internet model with many adoring fans, so who would want to kill her?
The investigation soon turns up many secrets. Was the studio she worked for covering up a dark secret of exploitation? Or was this a crime of passion?
When Ellen's stepbrother is attacked soon after her body is discovered Nathan is sure there's a connection. The guy's not talking, though; what is he so determined to keep secret, even if it puts his life at risk?
As the case deepens and they discover more about the murdered teen can Nathan Stone overcome his demons to find justice for an innocent young woman?"
Into The Fire has three storylines/cases in one book! One is also directly connected to the case in A Perfect Pose which 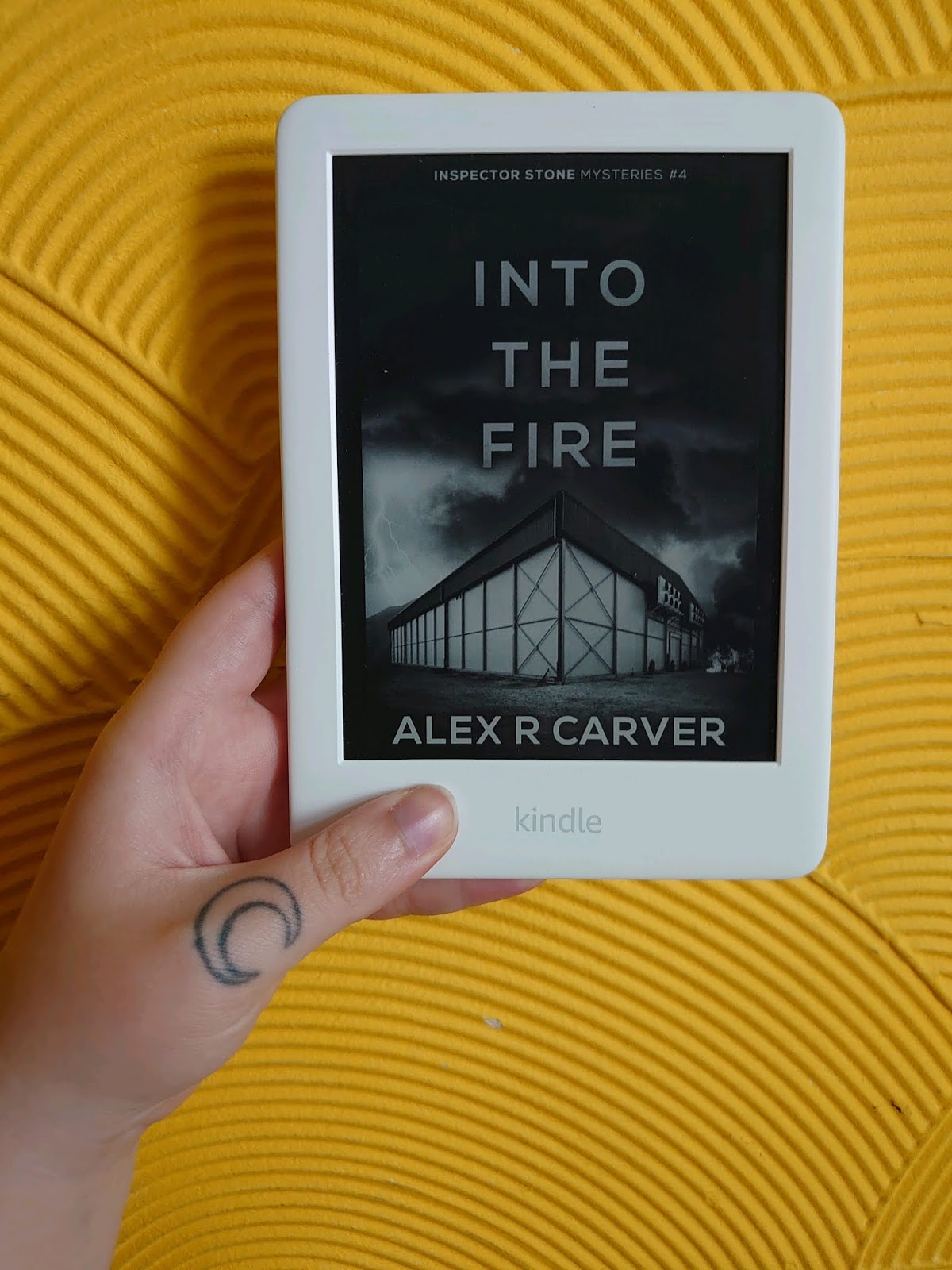 In most DI series's I've read, there is normally a nod to some information in a previous book - usually about the DI themselves but I don't think I personally have read a book that links backs to another case. Or in this instance, two cases. Please note, I have removed a sentence from the following blurb to avoid a spoiler!
"The past just won't stay dead for Nathan Stone..
When the Larsson Studio and its owner suffer a series of attacks, Nathan Stone must not only figure out who is responsible, he must try to lay to rest the rumours that have led to them. Rumours that have been encouraged by the local paper..
Just as he is putting that case to bed a body is discovered in a burned out car in Branton Wood, a car that is connected to Kurt Walker.
Nathan must decide whether he is the right man to investigate, and figure out how a man who has been dead for nine months can be connected to a body that is only days old. Is it a coincidence, or is there something more going on?"
A Stone's Throw really had me rooting for Nathan. Not as an inspector but as a person. Our protagonist has really been through it over the last four books! He deserved a nice holiday. But that would just be boring, wouldn't it? 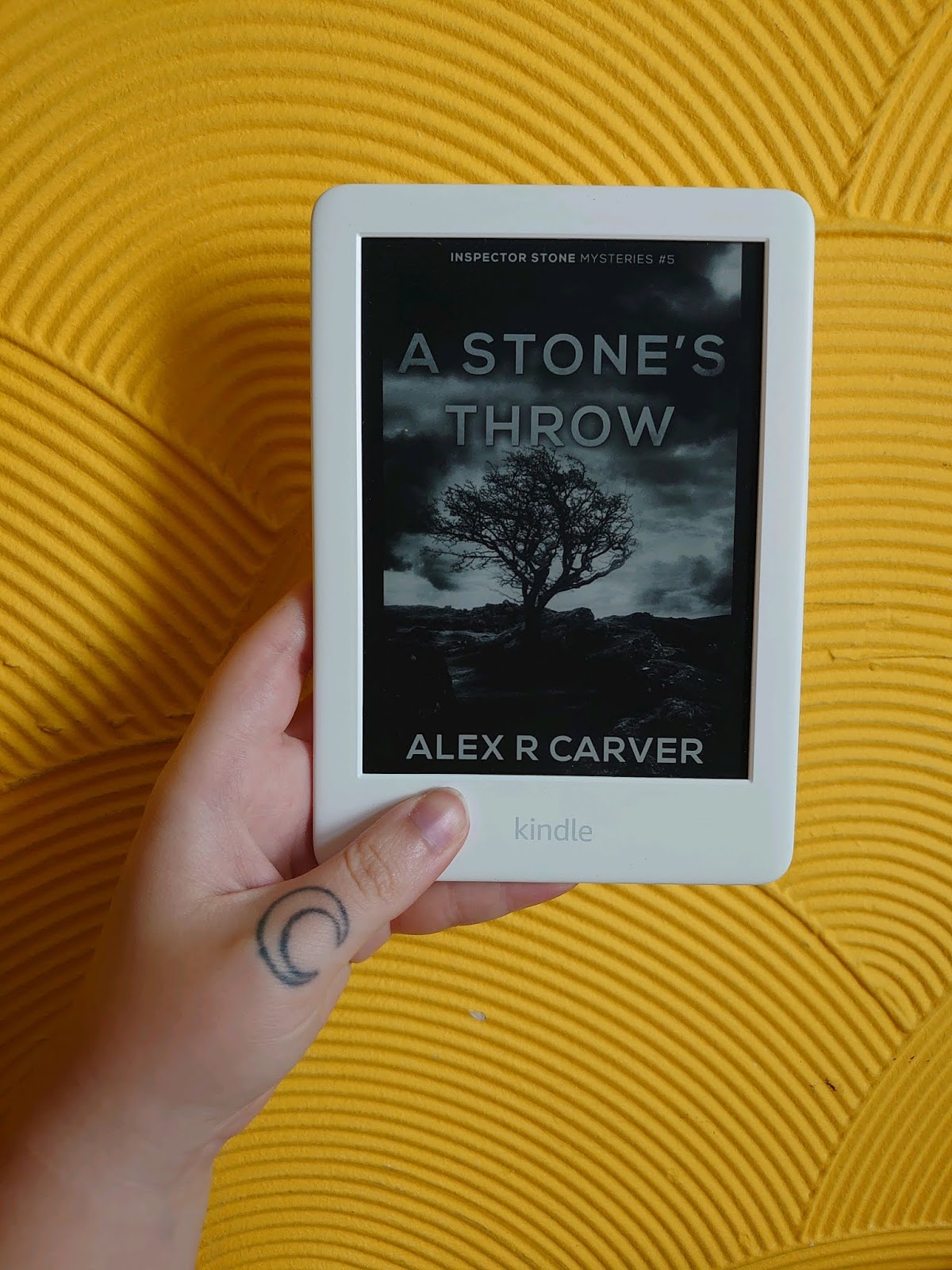 "A dead body really ruins your holiday.
During a much-needed break in Devon, Inspector Nathan Stone finds himself at the centre of a murder investigation when the wife of the owner of the hotel is found killed.
The last person to see her alive, he must contend with the suspicions of the local police.
The arrival of a storm that isolates the small village of Donningford from the outside world changes everything, however, and Nathan must take charge of the investigation.
A second murder drives home a frightening fact: Nathan, the other guests, and the hotel staff are sharing a roof with a hate-filled killer who will stop at nothing to exact revenge…and to prevent the police from discovering the truth."
I'm honestly torn between An Eye For An Eye or A Stone's Throw being my favourite! An Eye For An Eye is by far the most dramatic - and would make a brilliant film - but I loved how different A Stone's Throw was from the rest of the series. I feel Alex took a risk with this one but in my eyes it paid off!
One thing I love most about this series is that Alex doesn't keep you guessing about whodunnit. Sure, sometimes I like to try and work it out before the book tells me, but most of the time I am very impatient and want to know who's going to jail ASAP! Alex scratches that itch either in the first page or a few chapters in. Although he kept me guessing a lot longer in A Stone's Throw!
I very much enjoyed the Inspector Stone Mysteries, I really recommend them and I can't wait for book six! If you have a Kindle, Where There's a Will is still available to read for free. What are you waiting for?
Until next time,
Saph x
Labels: Saph's Reading Nook