Another year, another reading goal! I decided to take my goal down to 20 this year, as it seems rather fitting. I'm hoping to read more but sometimes reality gets in the way, so I think 20 is a pretty reasonable goal. Here's what I'm planning to read over the next 12 months: 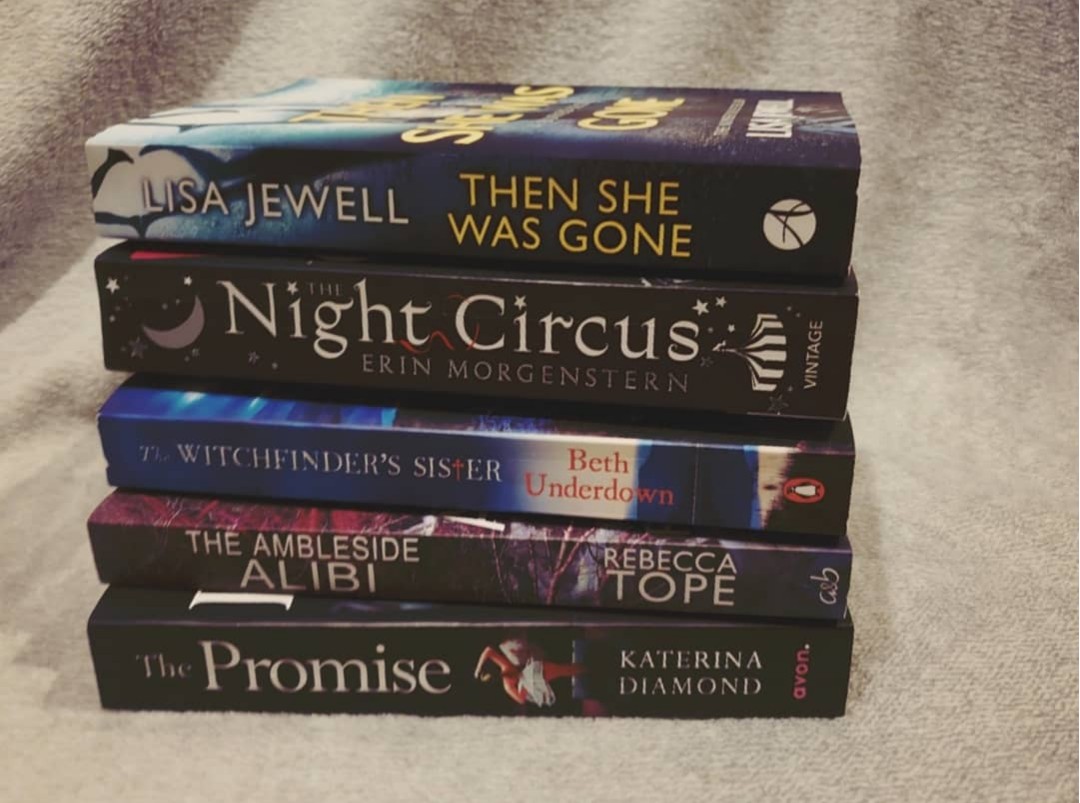 When a young woman is found strangled in her own bedroom, DS Imogen Grey and DS Adrian Miles are plunged into an investigation to find a twisted serial killer who likes to date his victims before he kills them.
Determined to stop the horrific deaths, Imogen is forced to act as bait - but will she get caught in her own trap? As the search for the killer ramps up, attention falls on the strange new boy in town. Why does he watch his neighbours through the windows? And could the truth be closer to home than any of them realise?

The Ambleside Alibi Rebecca Tope
After an eventful year, Persimmon 'Simmy' Brown is trying to put her tragic past behind her. But just when she thinks her life is coming together, it begins to unravel at the seams. With the delivery of a bouquet of flowers to an elderly lady - complete with a mysterious message attached - sinister secrets come creeping into the light.
When an old woman is found dead, Simmy is drawn into the centre of a murder investigation as the prime suspect names her as his alibi. While trying to rebuild her own life, Simmy must untangle the murky lives of others and uncover the motive behind a mysterious killing.

The Witch Finders Sister Beth Underdown
'The number of women my brother Matthew killed, so far as I can reckon it, is one hundred and six...'
1645. When Alice Hopkins's husband died tragically, she returns to Manning tree, the small Essex town where her brother Matthew still lives.
But home is no longer a place of safety.
Whispers are spreading - of witchcraft, and the terrible fate awaiting the women accused. And at the heart of it all stands just one man...
To what lengths will Matthew's obsession drive him? And what choice will Alice make, when she finds herself at the very heart of his plan?

Night Circus Erin Morgenstern
The circus arrives without warning. No announcements precede it...it is simply there, when yesterday it was not.
Then She Was Gone Lisa Jewell
She was fifteen, her mother's golden girl. She had her whole life ahead of her. And then, in a blink of an eye, Ellie was gone.
Ten years on, Laurel has never given up hope of finding Ellie. And then she meets a charming and charismatic stranger who knocks her off her feet. But what really takes her breath away is when she meets his seventeen year old daughter.
Because his daughter is the image of Ellie.
Now all those unanswered questions that have haunted Laurel come flooding back.
What really happened to Ellie? And who still has secrets to hide? 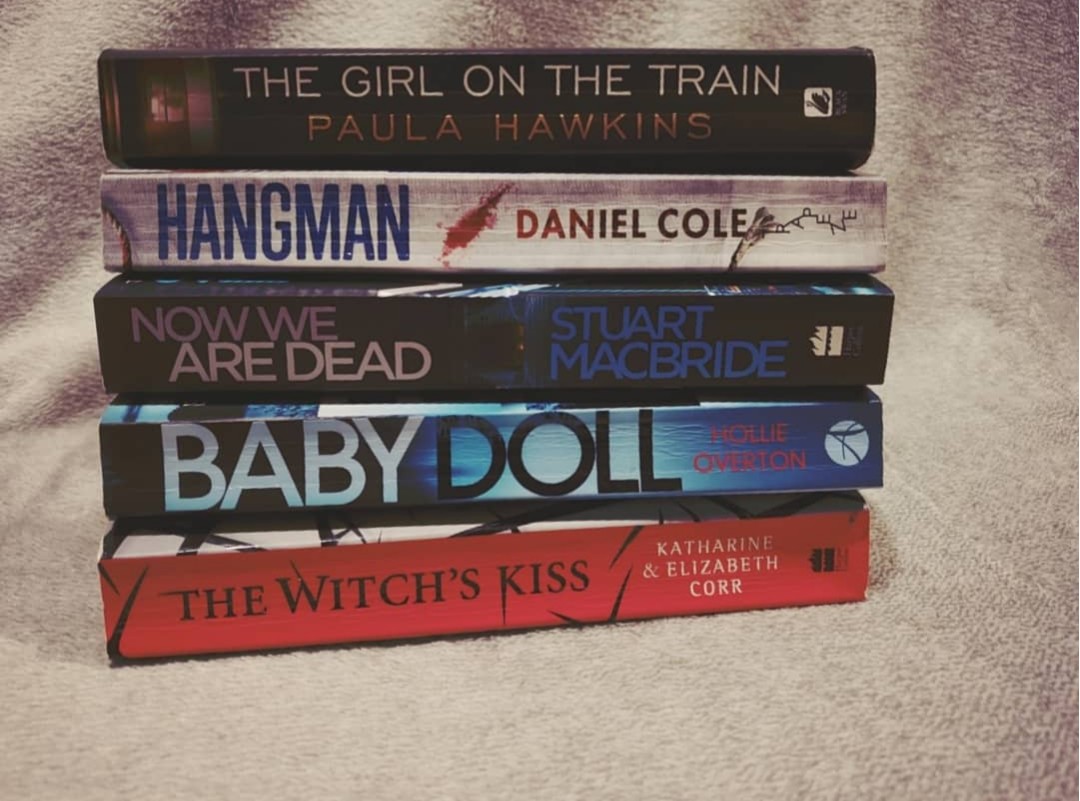 The Witches Kiss Katherine & Elizabeth Corr
Merry is an average teenager. She's also a witch. She is trying not to be, but she is. Then Jack comes into her life and she can't help falling under his spell. One problem - he's part of an evil, centuries-old curse that Merry now has to break. If Merry has lost her heart, will she lose her life too? Or can true love's kiss save the day?
Being a witch is dangerous - but being in love is even worse...
Baby Doll Hollie Overton
You've been held captive in one room. You've been mentally and physically abused every day since you were sixteen years old. Then, one night, you realise the captor has left the door to your cell unlocked. For the first time in eight years you're free. This is what happens next...

Now We Are Dead Stuart MacBride
Detective Chief Inspector Roberta Steel got caught fitting up Jack Wallace - that's why demoted her and quashed his sentence. Now he's back on the streets and women are being attacked again.
The top brass have made it very clear that if Detective Sergeant Steel goes anywhere near Wallace, she'll be thrown off the force for good.
But she can't just do nothing - if she does, he'll keep hurting women. The question is: how much is she willing to sacrifice to stop him?
Hangman Daniel Cole
A body is found hanging from Brooklyn Bridge, the word 'BAIT' carved into the chest.
In London, a copycat killer strikes, branded with the word 'PUPPET', forcing DCI Emily Baxter into an uneasy partnership with the American detectives on the case, Special Agents Rouche and Curtis.
Each time they trace a suspect, the killer is one step ahead. With the body count rising on both sides of the Atlantic, can they learn to trust each other and identify who is pulling the strings? Or will it be too late?
The Girl on the Train Paula Hawkins
Rachel catches the same commuter train every morning. She knows it will wait at the same signal each time, overlooking a row of back gardens.
She's even started to feel like she knows the people who live in one of the houses. Their life - as she sees it - is perfect. If only Rachel could be that happy.
And then she sees something shocking, and in one moment everything changes.
Now Rachel has a chance to become a part of the lives she's only watched from afar.
Now they'll see: she's much more than just a girl on the train...

The Breakdown B A Paris
It all started that night in the woods.
Cass Anderson didn't stop to help the woman in the car, and now she's dead.
Ever since, silent calls have been plaguing Cass and she's sure someone is watching her.
Consumed by guilt, she's also starting to forget things. Whether she took her pills, what her house alarm code is, and if the knife in the kitchen really had blood on it.

Dead Run P.J. Tracy
It should have been a simple journey - a drive from Minneapolis to Green Bay, Wisconsin. But a couple of unplanned detours lead Grace MacBride, Annie Belinksky and Depute Sharon Mueller deep into the northern woods, far from civilization and a mobile phone signal. Then the car breaks down.
The nervous search for a landline and a mechanic leads the women to Four Corners, a sleepy cross-roads town. And a place they soon wish they'd never stumbled upon.
Something terrible happened in Four Corners.
The town is deserted and the phone lines are severed. Grace, her senses honed by a lifetime of paranoia, sees sinister stories in details even cop Sharon misses, but it's Grace's instincts that might save their lives when they witness a chilling scene. And gain a terrifying knowledge that they fear they'll never be allowed to leave with...

Nothing to Fear Karen Rose
Sue Conroy is out for revenge. Recently released from prison, she is determined to find everyone who helped put her there. So when Sue abducts an eleven year old deaf boy, it is only the first step in an elaborate plan...
Running to Chicago, Sue heads to Hanover House, an inner city women's shelter, run by Dana Dupinsky. Dana safeguards many secrets in the lives of those around her but she would never harbour a kidnapper. That is, if she knew one was living at the shelter...
Dana only realises the true extent of the danger awaits her when she is thrust into the middle of Sue's evil game, and those around her start to die in increasingly violent ways. 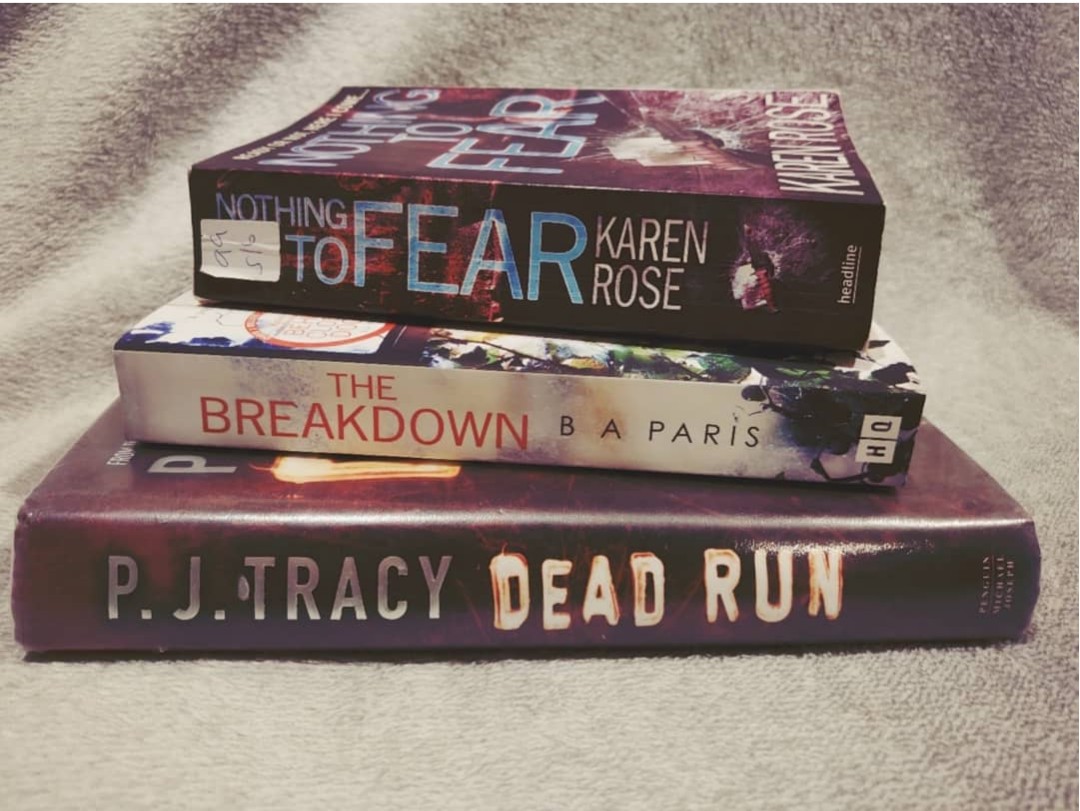 I know I have another seven books to add to the list, but I also have twenty-two books unread on my bookcase and I simply can't decide which ones I will want to read or when! I may want to finish all my Stuart MacBride novels. Or Karen Rose. Or Karin Slaughter. Or maybe I'll want to try someone totally new like Kate Baxter, or Alison Weir. I guess we will find out as the year goes, but make sure to befriend me on Goodreads to find out first!