A Day in the Life | A Good Day

Thank you to Tamara for suggesting I do this post! I haven't done one of these before, and I think I've only ever read one...so, here goes nothing! 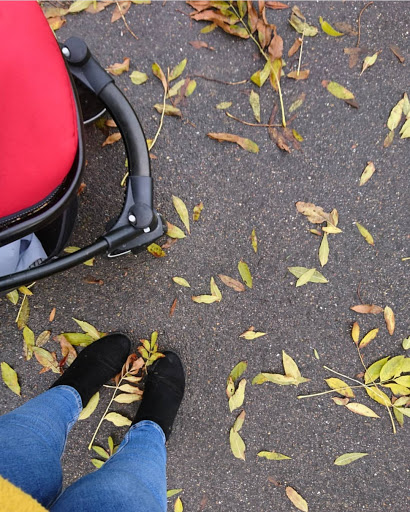 Tuesday 6th November
We didn't wake up until roughly half 8, which is the latest in a while. I actually meditated myself to sleep using the Calm app, and was asleep by 10pm. That was honestly the best nights sleep I've had in months, even Charlie slept basically all night! I woke up feeling so good, happy and motivated.

I got us breakfast (and a tea for me!) sorted, and was still feeling good. That soon changed though, when Charlie decided to start beating me with whatever he could get his hands on. This usually means that he's bored, and I realised that we haven't really been anywhere or done anything for a few days! So, I got us ready and took him off to the park.

11:15am
I almost thought he'd go for a nap on the way - he seemed to still be a bit sleepy - but once we got there, he got all excited and couldn't wait to get out of his pram.
Unfortunately, his boots immediately fell off and he wouldn't let me put them back on. The equipment was dry, but the grass was not, and of course he wouldn't stay off it. Sigh. He loved it though, he absolutely loves going to the park. I love it because there's never anybody there on a weekday, it's great! Though it would be nice to be able to make some Mum friends with kids of a similar age. One day we'll catch someone! 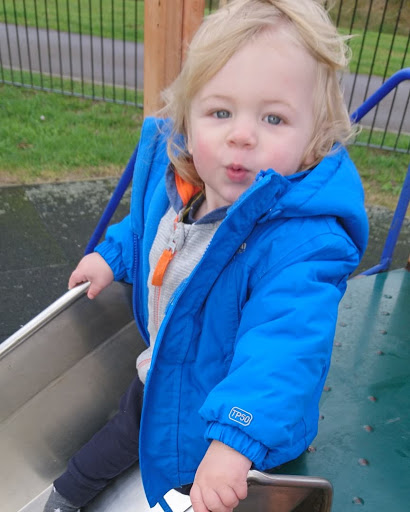 11:40am
He'd had a lovely run around, and kept flinging himself down the slide, but he also kept trying to escape. Unfortunately, the gate to the park doesn't actually lock and oh, guess what? Charlie can actually open the bloody thing! After three escape attempts, I gave up, put him back in his pram (socks off and feet dried first) and headed into town. Another reason why I like having the park to ourselves; no chance of me being distracted and him legging it!

11:50am
I actually very rarely go into town on my own, but actually it's usually an enjoyable experience. Although I'm incapable of spending more than an hour there when it's just Charlie and I - mostly because I skip all the charity shops. My first stop was Boots, where I treated myself to Soap and Glory Hand Food, and grabbed some formula and snacks for Charlie.

I did consider popping into the café I'm desperate to try out and get a hot chocolate, but I decided I'm not quite that brave yet. Plus I had my heart set on bacon and cheese wraps from Greggs for lunch. I grabbed those to go, and headed back down the High Street. Amazingly, I just managed to bypass New Look, and popped into Peacocks instead. Within the literal minute it took me to get to Peacocks, Charlie had fallen asleep, so I could shop in peace!
I didn't actually plan on getting anything other than some more socks for Charlie, but as I had time to browse while he napped, I ended up with two basic tops as well. I almost picked up a gorgeous skirt, but I really didn't want to pay £16 for it! After so many charity shop bargains the last month, Peacocks is suddenly very expensive.

Charlie woke up just as I got to the till - I've noticed he doesn't really nap for longer than 30 minutes while we're out lately - and wasn't very happy. Snacks/part of his lunch soon changed that. I was all set to leave, when I discovered a black hoodie I wanted. Again, I didn't really want to pay £14 for it, but I no longer had a decent hoodie and it seemed to be worth it. I headed back to the till, and managed to piss off the woman working there by doing so. She literally rolled her eyes at me. Ruuudee.

One more stop in Iceland and it was time to head home again.

1pm-ish
Home, ready to demolish my wraps and a cuppa. Charlie immediately went to the DVD player, so I put Monsters vs Aliens on for him while I got lunch together. He's absolutely obsessed with that film - but only up until Susan attacks Dr. Cockroach with a spoon. He thinks that's hilarious. He also started giggling at Susan and Derek before their wedding today, but I still haven't figured out why.

Charlie was still eating his lunch by the time I'd finished mine, so I used the opportunity to wash up and tidy up the kitchen a little. Getting outside made me feel so productive, whereas usually I'm knackered by this time. A decent sleep probably helped with that too! 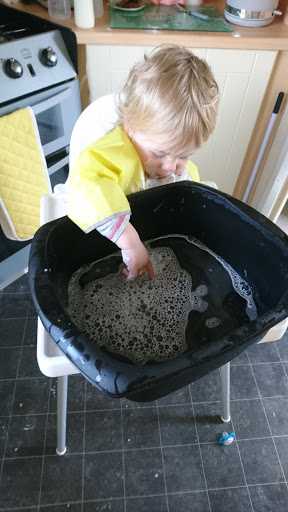 As always, Charlie made an almighty mess with his yoghurt, so as a 2-in-1 wash and play, I gave him a bowl of warm soapy water to play in. I don't know why anyone buys him toys, all he needs is water and bubbles and he's a happy bunny!

I will admit, the rest of the afternoon was a bit slow after that. Since I got more data and challenged myself to blog every day, I spend more time on my phone than I do playing with Charlie. I do feel incredibly guilty but at the same time, I think I needed a bit of a break. Charlie entertaining himself has been quite good for me, but I don't think it's great for him - he's barely touched his toys or books since I got the DVD player!

4:20pm
Charlie started getting tired already - incredible really, after two straight nights of 9pm-ish bedtimes - so I decided to get dinner started early, to make sure he ate before bed. He decided to help make it! By that, I mean he whinged at me to pick him up so he could see what I was doing. He's fascinted by me making dinner lately, it's quite sweet but not great if I need both hands!

6:00pm
Charlie was fast asleep in bed, I was able to get tidied up in peace, and even start pampering myself. Nails painted, face mask on, blog open.

10:30pm
Yep, four hours straight of blogging (and tweeting) before I finally started to feel tired enough to sleep. I got myself ready for bed and made myself a tea to wind down with. I was just about to slip under the covers when...Charlie started crying. Ugh.

00:10am
Charlie finally went back to sleep around midnight. It took two lots of milk and some belly rubs! I was exhausted, and fell straight to sleep.

I hope this wasn't too boring! This isn't a typical day for us, pre-data we'd spend all day playing, or we'd spend the day with Mum. I may write a couple more of these, as every day is different.
Labels: Life After a Hysterectomy Lifestyle