What I Read in August

I actually got less reading done in August than I anticipated! I hoped to read as many as four books last month, but it took me way longer to get through book #3 than I thought it would! But, I digress. Here's what I read in August. 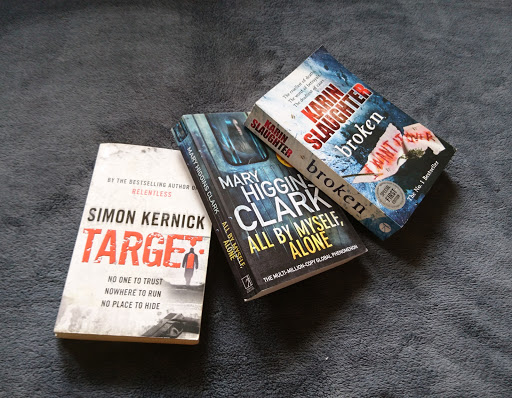 All By Myself, Alone | Mary Higgins Clark
I was incredibly disappointed with this book! You can read my full review here but to give you an idea of how much I didn't like it; I only gave it 2-3 stars on Goodreads.

Broken | Karin Slaughter
I looveed this book, it was right up my street. Murder, drama, romance, dirty cops. Could have done without the suicide scene/all the details but you know, I'm not the writer. I don't want to give too much away but I would absolutely read more Karin Slaughter novels! Which is just as well really, as I got another one of her books sitting on my bookshelf!

Target | Simon Kernick
As I said earlier, it took me longer to get through this book than I anticipated. It wasn't even because I didn't enjoy it, as I did, but I just didn't seem to have as much time to read towards the end of the month than I did at the beginning. Of course, taking so long to read it meant that by the time some important information had been stated, I'd forgotten the relevance! I wouldn't say this book was 'fast paced' exactly, it was just...interesting enough to keep reading, but not SO interesting that I couldn't put it down until I was over halfway through it. It did have a plot twist I wasn't expecting though! It took me 12 days (the longest it's EVER taken me to read one book!) but I finally finished it. The ending was pretty satisfying, and I absolutely would read another Simon Kernick book!

As I said previously, I'm a little disappointed that I only got to read three books, but I'm also pleased as punch that I read as many as that! I honestly thought I was still going to be reading Target at this point. Have you read any of these books? Or would you add them to your TBR list?
Labels: Saph's Reading Nook