Freeeedoooommmm! Our June holiday to Sheppey couldn't come quick enough, I was desperate for the daily long walks past the canal, and to finally take Charlie swimming. I was packed up and ready to go long before Mum and Dave came to get us. 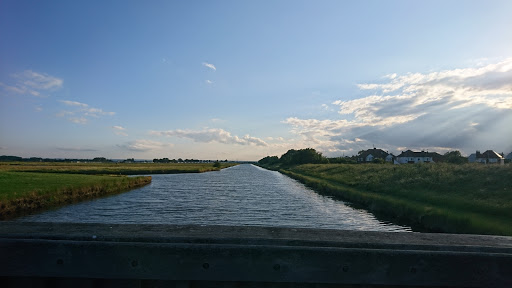 We left Tuesday afternoon, unpacked, and then went on a lovely long walk. Charlie got to play in the sand pit, and then watched a family of swans swim by. After dinner, he made a lovely mess with a chocolate mousse, and refused to go to bed before 10pm. 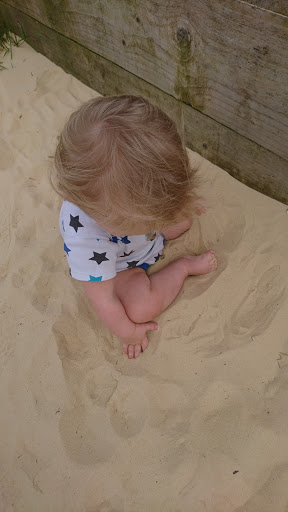 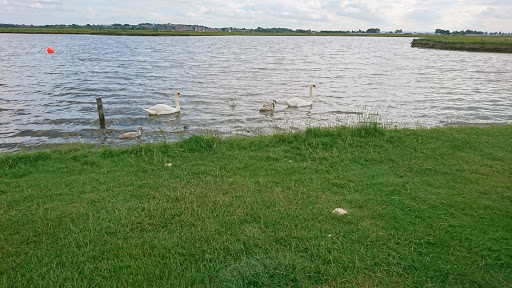 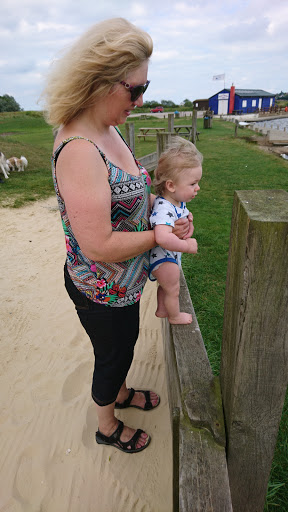 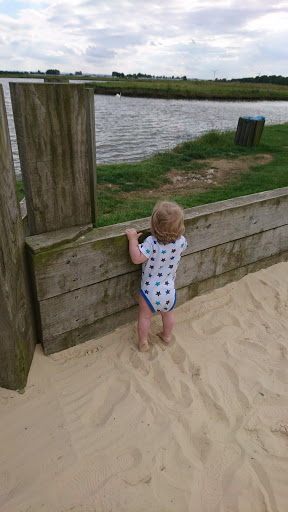 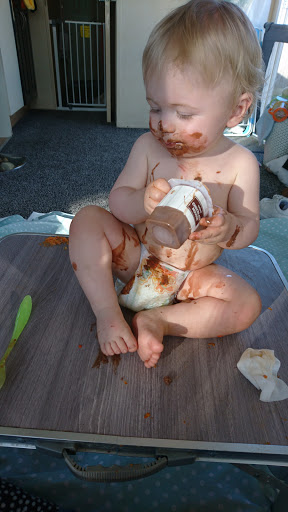 Wednesday
Wednesday was shopping day! The pool is shut on Wednesdays, so we headed off to the retail park to check out the new clothes in Poundland. I could have bought so much more than I did, but as I struggled to pack to start with, I thought I should limit myself. After a good few hours of shopping, we went back to the caravan, had lunch and then got ready for Charlie's cake smash photoshoot! I'll be sharing a full blog post about it but spoiler alert: he didn't get anywhere near as messy as I expected! He made more mess with the mousse on Tuesday.

The best part of Mum and Dave having Luna and Tarja is having to take them for walks every few hours. We went on yet another evening stroll and it was the best part of the day. The only downside is that we didn't make it back before Charlie's bedtime, and he fell asleep in the pram! He woke up shortly after we got back but the damage was done, and he went to bed even later that night. 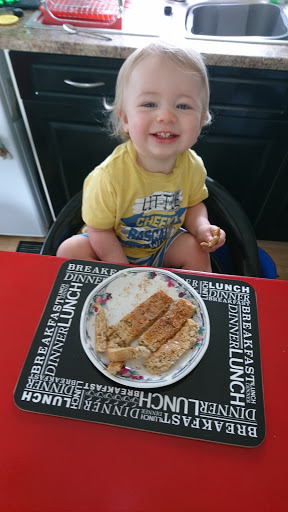 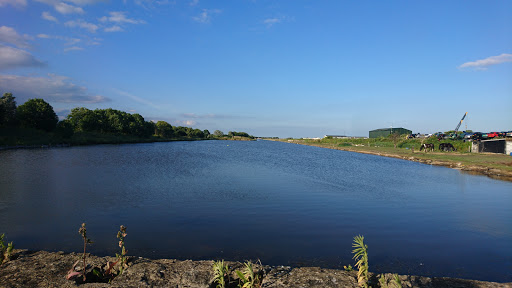 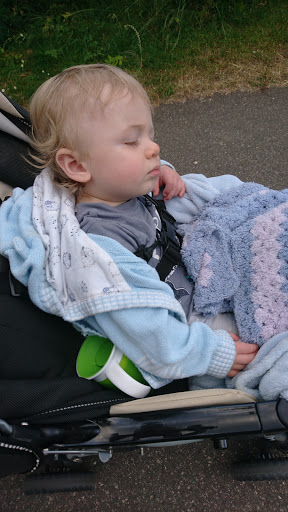 Thursday
Swimming day! We were in the pool by 10:30am (kids aren't allowed in there before 10) and, apart from one other woman, we had the pools to ourselves! I introduced Charlie to the water in the baby pool first, but after about ten minutes or so, I decided to join Mum and Dave in the deeper pool. He loved it! He started off walking in the water, and we worked up to 'floating', and eventually he kicked about with happiness! We were in there for almost two hours! I loved being back in the pool, although I essentially had to re-teach myself how to swim! I haven't been swimming in probably over a decade, so it was a lot of work. But I must have done about 10 lengths! It was bloody hard work though, my triceps were killing me and I was absolutely shattered.

Despite Charlie being so tired after swimming, he still managed to put off his nap for another hour but then slept for almost two! Shortly after he woke up, we headed off for another walk. We met a family of horses on our way to the canal! Daddy horse was ginormous but really friendly, and let me give his nose a good stroke. Charlie didn't really seem to react to the horses at all, which disappointed me a little. But at least he didn't cry! 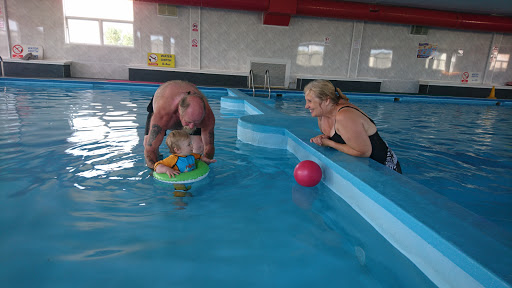 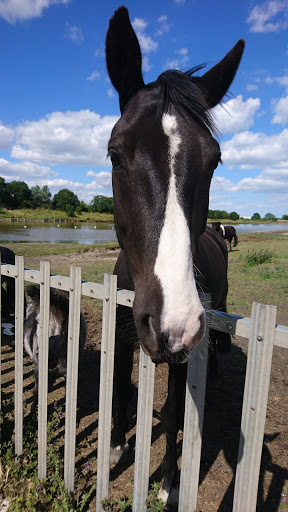 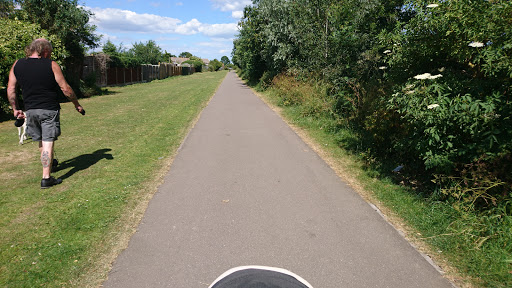 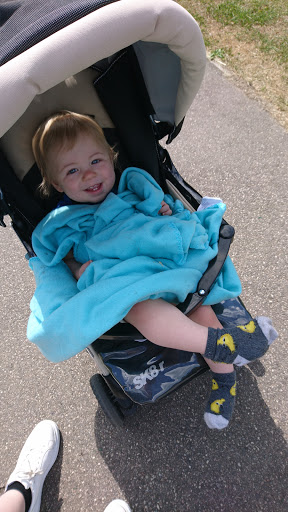 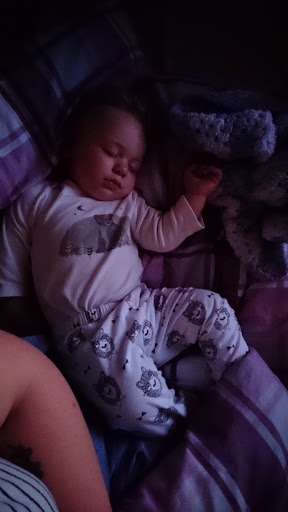 Friday
Friday morning literally started with a bang. Luna tried to jump over me but instead crashed straight into me! I was left with a lovely purple bruise for over a week! It hurt like hell.

We got back in the pool as soon as we could and the pool was literally completely empty the whole time we were there. At one point Mum and I even started playing water polo! Once again, Charlie fought his nap for over an hour but then slept for nearly two.

I can't remember what else we did! No doubt we went for another walk...I think we just spent the evening in front of the TV before bed!

Saturday
I felt like complete crap Saturday morning. I hadn't been sleeping well all week due to Charlie spending a lot of time sleeping in his own room, and me not liking it! I skipped swimming but Mum and Dave took Charlie for me, while I got ready to go to town afterwards. Once they got back I was actually gutted that I didn't go, it sounded like Charlie had loads of fun! He SURFED! The lifeguards there absolutely adore him and chucked in tons of toys and various things for him to float in/on and he had a whale of a time.

Once everyone was ready and Charlie had napped, we headed into the town. It's literally a 15 minute walk away and so handy! It was crazy hot though so it wasn't much fun. The town is a bit of a let down in my opinion. If you don't have an unlimited amount of money to spend there's not much point in going to be honest. Although the highlight is a little bakery that has cakes and donuts to die for. Not that we went in there this time! Although I did go into Peacocks and treated myself to a beaut pair of sunglasses (for when I get contacts again!), a swimming costume and a pack of trainer socks. I realised on Thursday that I packed my swimming costume without checking the size...it was a size 8...I am a size 14. Lucky that Mum had one I could borrow until I bought myself a new one! It's so beautiful too, and it was 30% off in the sale, so I got it for £15 rather than £22! I actually really wanted one with a skirt, but this one was too pretty to say no to.

I can't actually remember if we took the dogs for a long walk or if Mum and Dave just took them down to the dog pen at the front of the park, but we actually went out-out! The clubhouse has a 'kids club' hour where they play lots of musical games and have lots of fun, so we went there for dinner and to introduce Charlie to it. He stayed in his pram for a bit and kind of kicked his legs about to the music and watched the older kids play. A young girl (probably about 16) that works there fell in love with Charlie, and kept coming over to him and telling him how handsome he is, it was so cute! I eventually let Charlie out of his pram and he went mental, crawling around the club as fast as he could, getting Nana to chase after him. I, on the other hand, was downing as much alcohol as I could (I really wasn't, I had like three disaronno and cokes) to drown out the sounds of bingo and admiring a fit security guard. No shame. We were actually waiting for a Beatles tribute duo...we waited 3 hours and left about 10 minutes after they started. Reason one: Charlie reeallyy wanted his bed. Reason two: they were absolute shite. The guitar playing was ace, couldn't fault it. But the singing...yikes. But it was nice to actually go out and do something other than walk or watch TV! It was a nice end to a fab week.

I almost didn't want to come home on the Sunday, I wanted to stay and swim and go on long walks every day! But, alas, I couldn't. I did come home with the beginnings of a nice tan and 2lbs lighter though! I'm so looking forward to going back, and if I could afford one, I'd buy myself a caravan while I was there! If anyone fancies donating £25,000 it would be much appreciated...

It was so lovely to spend time with my Mum though, she'd only been gone for three weeks at this point but oh my god I missed her so much! She was also 8lbs lighter, looking ten years younger and GLOWING! She is looking so fab and I'm so happy that Sheppey is being good to her.
Labels: Lifestyle