All By Myself, Alone | Book Review #2

What's this? Another book review? Good! I decided last month that I really wanted to start doing more bookish blog posts, and what's more bookish than a book review?! Last month I reviewed Angels Can't Swim, a novella by Alexandra McCann. This months book is All By Myself, Alone by Mary Higgins Clark. 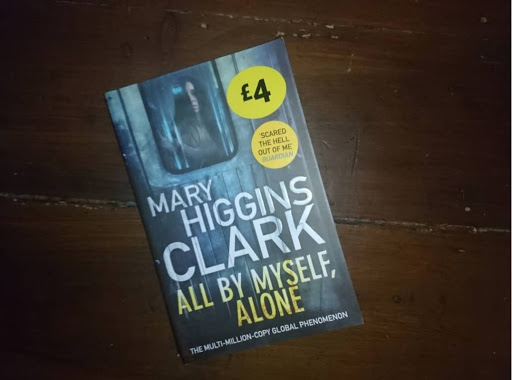 I haven't actually read a Mary Higgins Clark novel before, but the 'Scared the hell out of me' mini review on the front page lured me in to this one. I actually picked this book up for like 50p at my Mums leaving party (don't ask) back in May, and have been dying to read it ever since. But, I've been prioritising my books this year, and this one had to wait.

The Synopsis
A glamorous cruise on a luxurious ocean liner turns deadly in this thrilling novel from the Queen of Suspense.
Fleeing the humiliating arrest of her husband-to-be on the eve of their wedding, Celia Kilbride, a gems and jewellery expert, hopes to escape from public attention by lecturing on a brand new cruise ship, the Queen Charlotte.
On board she meets eighty-six year old Lady Emily Haywood - the owner of a priceless emerald necklace that she intends to leave to a museum after the cruise.
But three days out to sea, Lady Emily is found dead - with the necklace missing. And the list of suspects is large and growing.
Celia sets out to find the killer, not realising that she has put herself in mortal danger before the ship reaches its final destination... 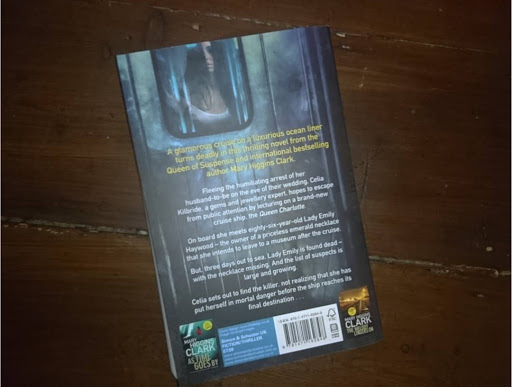 My Thoughts
Honestly, I struggled to get into it. But the chapters were fairly short, so I read a fair few in a short amount of time without really even realising. It took me a good few chapters to figure out when it was actually based, though. Once I realised that 'People' magazine and a Disney cruise was mentioned, and the Titanic 'had been the height of luxury one hundred years earlier', I finally realised it was set in 2012-ish. I think that made it easier for me to get into once I worked out the timings!

By chapter 17, I found myself trying to guess who-dunnit. 'It' hadn't even happened yet, but I still managed to come up with a sizable Suspicious Persons list. But, before I could get to the interesting bit, I had to endure lectures. Seriously. Lectures on etiquette 100 years ago, the history of jewellery, and Shakespeare were held on the cruise. Yawn. I didn't dare skip over anything though, in case I missed something important for later on in the book. I didn't.

Suddenly, three chapters in a row were written in a way to arouse suspicion about four different characters - surprisingly, all of which were characters that had already made their way onto my List. That made it a little more interesting, but it was shortlived.

This book references the Titanic a lot. Like, a LOT. They were even doing the same voyage, except they went from New York to Southampton, rather than Southampton to New York. There was even some 'propulsion issues', which I'm sure happened in the film. Even the Captains description reminded me of the Captain in the movie. Heavily inspired? I think so. To be fair, it does mention later in the book that the designer/owner of the ship wanted it to be based on - but grander - than the Titanic. But still, how original, not.

Eventually, Lady Ems killer was revealed. All I could think was I BLOODY KNEW IT! The killer was suspect number one on my list - although originally number three - and I was feeling pretty damn proud of myself. Although the reveal/reaction from other characters was a little...underwhelming. It was basically a 'You absolute sod!'* and that was the end of that really. The plot twist within the plot twist was the most exciting part of the entire novel in all honesty. *Not a direct quote.

Overall, I felt disappointed and bored reading this. The 'Scared the hell out of me' on the front cover was absolutely false advertising, this book wasn't scary in the slightest. I don't think I would bother with another Mary Higgins Clark novel, and I'm feeling glad I picked this up for only 50p. Also, I feel like the title is completely irrelevant to the storyline. Yes, the main character, Celia, probably was feeling a little depressed but she quite quickly made new friends, and even makes a love connection. I think the title and the front cover makes this novel seem much more suspenseful and scary than it actually is.

Has anyone else read a MHC novel? Were you left feeling disappointed, or should I pick up another one? Let me know in the comments below if you're enjoying my book reviews!
Labels: Reviews & Sponsored Content Saph's Reading Nook