What Is In My Makeup Bag?

For someone who rarely wears makeup, I seemed to own a lot of it. Mostly in the form of lipstick. I knew it was ridiculous that my sizeable makeup bag was struggling to zip up, so I did the sensible thing and went through it.

*Forewarning: this post mentions Younique a lot, but this is not a sponsored post, I just happen to own a lot of it.* 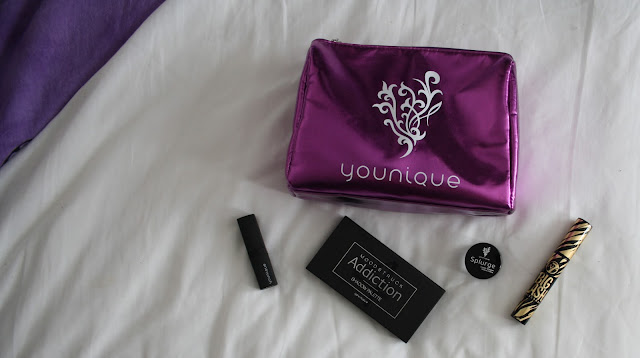 Here's what I had.

This isn't a lot to many people but for me, it was crazy excessive. I just don't wear makeup enough to warrant having that much. So, I did some swatching, played around with the products and made some decisions.

Mascara
Four bloody mascaras?! Three black, one brown. One of the mascaras was just plain crap so I chucked it, the brown one was super old and smelled of paint so in the bin that went too. My favourite mascara (Big Lash by w7) eventually dried up so I was left with my brand new Younique 3D Fiber Lash mascara. Which I hate, so I chucked that too. Honestly if it wasn't for the fact that sometimes the only eye makeup I wear is mascara, I would have been fine with not owning any at all. But as I can get my favourite mascara for less than £2 (and free delivery) from Amazon, I might as well have my favourite mascara!

Eyeliner
Four black ones, one brown, again. Two of the black liquid eyeliners (both Younique) had dried up so they were binned, and I just didn't like the brown pencil eyeliner anymore so that went too. This left me two black liquid eyeliners (also from Amazon) that are actually duo eyeliners, so when the liquid runs out, I can switch to the pencil! However, as they're from China they're obviously not CF, so when they both run out I'll definitely be looking for cheap, CF alternatives. Leave recommendations in the comments please!

Eyeshadow Palettes & Cream Eyeshadows
I've only recently started wearing eyeshadow and I always go for the same two shades every time. I did have a play around with the colours from the other two palettes but I somehow made myself look like I'd been punched in the eyes so they had to go. Luckily Mum took a fancy to them and she gets good use out of them! Although I wish I could just get a little compact of the two shades I wear, it's such a waste of space in my makeup bag having a full sized palette just for two shades!

The cream shadows on the other hand, I only managed to get rid of one of them, as it really wasn't my colour. This also went to Mum, as she'd had the same shade previously and loved it. The other two I love to use as eyeliner for special occasions/nights out, as they're glittery! I have one black, one green and I love them.

Lipsticks/Glosses
12 lip products, ouch. I had 3 reds (all Younique) and once I swatched them all together, I realised they were all essentially the same shade. So I chose to eliminate them by quality. I remembered that the lip gloss kept bleeding the last time I wore it, so that went in the bin. Although the liquid lipstick was actually my favourite of the shades, the quality really wasn't that great, and an absolute pain to apply. So I was left with the matte lipstick and I have no complaints, except that it could be a little redder.

Nudes/Pinks
I had five nude/pink lippies, three of which are Younique, one from New Look and one from Rimmel (my first ever lipstick). I got rid of the Rimmel one without even swatching it, as I no longer wanted to hold onto a non-CF product that I knew was a similar colour to my CF one. The New Look matte lipstick was also essentially the same shade as a CF one, but the CF one was much nicer quality, so away that went too.
This left me with one nude matte, one pink matte, and a nude lip gloss. You guessed it, all Younique. Honestly, I swear this isn't a plug for Younique. Apart from the Opulence (matte) lipsticks and the face mask, I don't even like Younique that much!

Other colours
I had 3 more liquid matte lipsticks and a lip gloss. Yes, all Younique.
The matte lipsticks were brown, dark purple and light purple. I noticed that the darker the LML, the worse the quality was, so I got rid of the brown and dark purple, but kept the light purple. I honestly wasn't even sure if I would ever wear it but I decided to try it out one day and Twitter loved it, which made me feel so much more confident about it! Thanks guys!
My last lip gloss is actually a clear one! I wear this on top of my nude lip liner (Primark) and it actually creates the same look as my nude lip gloss - which is just as well because it seems to have gone missing!

Face
I don't even use foundation, which means I don't use the primer (I still haven't even opened it) but have decided to keep them both anyway; just on the off-chance. I know that's exactly the opposite of what I'm meant to do but that shit is expensive; I'm not ready to let it go yet!

I spoke about the contour palette in my every day makeup look post: I literally only use the 3D cream because I can't contour to save my life! I'm not really that bothered about learning how to anymore either, so it's another thing taking up unnecessary space, but I don't want to get rid of it because of the cream! But once the cream is gone I will chuck the whole thing.

I also mentioned the concealer in my makeup post. Again, I only use it for under my eyes (usually after very little sleep) but I love it. I would use it on other areas but as I don't use foundation, I think people would notice patches of skin covered in concealer...

So, in about half an hours worth of testing and swatching I managed to get my 32 (32?!) products down to just fifteen! And my makeup bag loves me for it. The best part is that my collection is 99% cruelty free! Over time I'll probably be able to whittle my collection down some more, as there are some items that I wouldn't repurchase once they've run out. So who knows, maybe next year I'll be doing another one of these posts and only have five items!

What do you think of my collection? Would you manage on so little makeup? Let me know in the comments and don't forget to leave cruelty-free liquid eyeliner suggestions and prices!
Labels: My Minimalism Journey