My Experience With Citalopram

As you may know, back in February I was officially diagnosed with depression, and was (somewhat forced in my opinion) prescribed an antidepressant called Citalopram. Apparently it's the safest one to take during pregnancy, as much as I didn't want it. 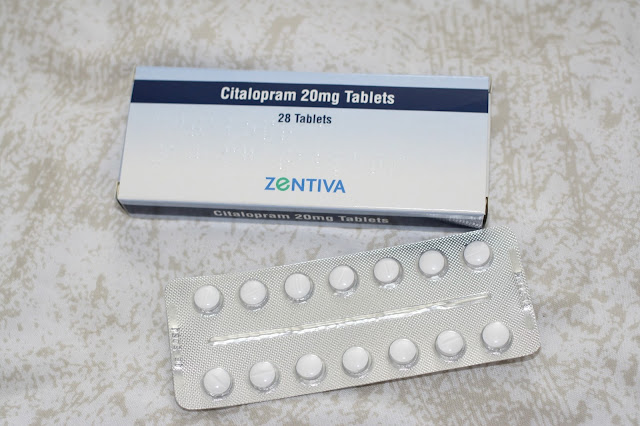 I had to take one 20mg pill a day, and the first time I took it, I threw up. Although I'm honestly not sure if it's to do with the pill or because I hadn't eaten enough that day. I don't think I took one again until a week later. It was only in early-mid March that I started taking them regularly. I really didn't want to be on them, I'd been feeling fine since the week before I was prescribed them, and I'd been feeling fine since. But, my midwife whinged at me to start taking them so I begrudgingly did.

The first day that I finally remembered to start taking them again, I felt really woozy and sick, and couldn't get out of bed for 40 minutes or so. I took one every day for three days straight, but then forgot to take one on the Saturday that I was having my bridal hair and makeup trial. So I missed out Saturday, and started again on Sunday. And then felt really shit for ages after taking it. There was definitely a pattern, and definitely some motivation to make sure that I didn't miss a day!

I even noticed that I start to feel a bit unwell if I was a bit late having it, so I tried to take it at midday every day. A week later, and I hadn't really felt any benefits or differences yet. The leaflet does actually say that the first two weeks of taking Citalopram can actually worsen your depression or anxiety, including thoughts of suicide and self harm. Fantastic. But, I didn't have either of these side effects. One of the common side effects I did notice, however, was sleepiness. I literally wanted to nap as soon as I'd taken it, and I'd generally only been awake for an hour or less by the time I took it. It wasn't ideal, but there were worse side effects to have.

I was usually able to fight through the tiredness if I was already up, dressed and needed to be somewhere, but if I was still in my pyjamas and yawning so hard my eyes watered, you can guarantee that I was going to go for a nap.

By week three I was feeling fantastic. Still a bit tired but I was more motivated and happier than I've ever been. I honestly don't know if it was the Citalopram making a difference or if it was just coincidence. Unfortunately, during weeks four and five I kept forgetting to take it daily, so I missed every other day. I didn't feel depressed but I certainly noticed a difference. However, it's hard to say how much difference missing a few days made, as I had a lot on my mind those two weeks, plus a cold, so it's hard to know how much the lack of Citalopram affected me. Although I did notice that I no longer felt sick or woozy once I took them after missing a day.

Week five also meant a check in with a doctor, to see how I was getting on, and to renew my prescription if it was needed. I was hoping to not have to get them renewed, as they could have some pretty nasty side effects on the baby if you take them during the third trimester. However, he reassured me that there hasn't been any cases of the baby being harmed by it, so I agreed to get another months worth and to have another check up with him in four weeks time. Only problem is that I was in such a rush to get out of there that I forgot to book my follow up appointment and just kept putting it off. I also stopped taking the Citalopram.

I kept forgetting to take them every day for the last two weeks of April, and kept meaning to take them in May but, after a week, I just gave up. I didn't really feel I needed them any more. Obviously due to my circumstances and where my relationship was at by then, I was upset 90% of the time, but I was coping. Antidepressants wouldn't help a broken heart, and I wasn't having intrusive thoughts (apart from the odd I fucking hate my life) so I felt I would be okay without them. Even Mum was impressed how well I was coping, although she was pretty pissed off when she found out. But even she realised that I wasn't really feeling depressed, I was just sad and hurt.

Overall I am glad that I got the help but don't really feel like it changed my life. I was recovering before I was even seen by the right kind of doctor, so I don't think it really made that much difference. The only real difference now is that I feel comfortable talking to professionals if I need the help, and know now that there are people who can and will help. Previous attempts at getting help were futile, but talking to the crisis team has completely changed that for me, and I know where to find support now.

Don't be afraid to get help like I was, it does not make you weak and you are not letting anyone down. We all need a helping hand sometimes: reach out for yours.