It's that time again; budget recap day! For April I gave myself a budget of £300 in cash and I aimed to keep as much money as possible in my bank account. At the beginning of the month I had £866 left in my bank account and I wanted to try and not go under £600. Let's see how I did, shall we? 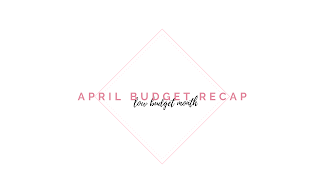 I actually started off recording all my spending really well, but after a week it tapered off. Day one of the new low spend month and I ended up making a HM order and finally used my gift card! I bought myself 2 new bras for £17.99 each. Except only one arrived so saved a bit of money there! I also ended up ordering my mum a new bag for her birthday and Charlie really needed new shorts for the upcoming Summer, so I bought him a 3 pack of denim shorts. I also found a Ninjago football kit on there and as he's loving football clubs, I couldn't resist it! I could have spent my entire wage but I just about managed to stop myself...

Spent: £20 gift card, £55.96 on my card.
I then ordered McDonald's for dinner and spent another £30.33. Off to a great start!
This month I finally got myself a Blue Light discount card, which is helpful because yay, discounts but also not helpful because I ended up making two Boohoo orders this month because I got a discount. Yikes.
Four days into April and I'd already spent £99.06 on my card...what kind of cash budgeting is this?!In the first couple of weeks I had to go shopping for lunches and snacks a couple times and used cash both times. I lost the receipts but after counting my cash I had £280.64 left by the second week of April.
On holiday I actually ended up not spending any money which was a lovely surprise. After the holiday however...not so much. We spent the day with Joshs sisters and I ended up getting us Costa for brunch, Charlie a McDonalds for lunch and then I spent £81 on my card in Go Outdoors. The following day, Josh, his brother and I went to the cinema. I used my Blue Light card and amazingly got a £10 discount between the three of us!
Josh and I both had a Specsavers appointment and killed time in town. I finally found the gift I wanted for my nephews birthday in The Works and also bought him and Charlie some new books. The Works actually had 3 for £5 deals on books so I saved £1 there and used cash. I also booked Charlie's birthday party this month and spent £30 on the deposit (using card.)
I now have £29.90 in cash left in my purse but I have been putting some coins into my cash binder throughout the month so I probably have more left over than that!
As usual, the majority of my spending went towards food. I also bought Josh a new plant for £12 and I spent an embarrassing amount of money buying boosters for Homescapes. Overall; not a great month for budgeting. Unfortunately I did go under £600 in my bank account, which I'm gutted about but I only have myself to blame! That being said, I didn't go under £400 so...I'm pleased but also disappointed.
I also received £5 cashback from shopping in Go Outdoors, but I won't receive that until the end of May.
Here's hoping I do better next month!
Until next time,
Saph x
Labels: My Minimalism Journey