Budgeting to Zero | My First Attempt

Budgeting to zero is something I've been hearing about for a few months now, and I've never been completely convinced by it or fully understood how it works. However, when I was filling in my Budget Planner for June, I actually managed to budget to zero this time! I feel like it helped that I was listening to Tanya Michele's Cash Envelope system video at the time. 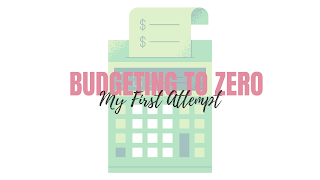 Admittedly I couldn't fully budget to zero because some of my income isn't guaranteed, so I just worked around what I knew I would be getting this month.That being said, I did over-budget on certain categories and I was hoping to spend less than I budgeted.

As an impulsive spender, I honestly thought budgeting to zero would be impossible for me. Especially as a mother to a soon-to-be four year old who appears to be going through a growth spurt. Who also happens to be so cute and polite when he's asking for something in the shops that I can't help but say yes to him...it wasn't that long ago that I was only supposed to be buying him a £1.50 hot wheels car (an impulse buy) but also left with a £9.99 George pig bath toy. He absolutely adores it though so I can't be too upset. I really want to try and avoid going overboard on his gifts this year, as he already has so much and we have a big family who will be buying for him.
To try and help myself along, I ended up going through my subscriptions. I bought myself two books that I had borrowed from Kindle Unlimited but wanted to re-read, and then cancelled the subscription. My subscription was still active until early July so I still haven't really saved any money there this month. I also cancelled my Word document app subscription. Unfortunately after I had already paid for the month but oh well, at least I'll be saving £5.99 next month.
I actually feel like I did really well this month! In fact, if it wasn't for Charlie accidentally spending £13 on a game on his tablet, I would have stayed well within my budget! Today is my July-August pay day and I have already budgeted to zero again! I'm really excited about it this month, and hopefully Charlie won't have any more mishaps.
Do you budget? Please share any tips in the comments!
Until next time,
Saph x
Labels: Lifestyle My Minimalism Journey