Caravan Life | One Month as a Home Owner

It's been a whole month since I officially moved in to my little caravan. Well, I say 'little', it's actually pretty spacious! It took me almost a full two weeks to actually want to spend the night here. Why? Because I was a teeny bit scared about the prospect of ACTUALLY living on my own! I literally used every excuse under the sun to put it off for as long as possible.

To be fair, I wanted it fully cleaned and a bit more furnished before Charlie and I moved in, but I think Mum and Dave underestimated how hard it would be to have us in their little caravan for a full three weeks, so after filling my kitchen cupboards and the fridge, I packed up the rest of our stuff and took it back to mine. 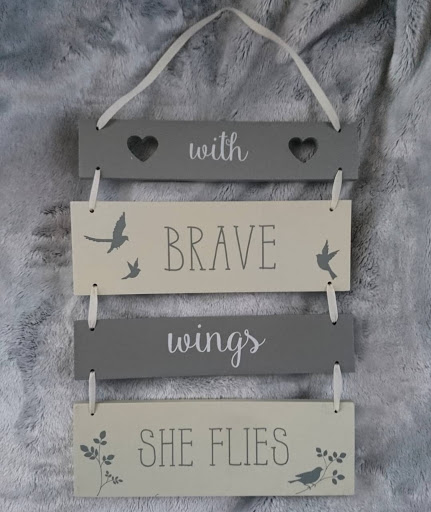 Combating Loneliness
The loneliness kicked in almost immediately, the first night after Charlie went to bed. Even though I do enjoy my own company, being alone for long periods of time is something that I really hate since having Charlie. However, knuckling down with cleaning and tidying up usually takes my mind off it for a while, and then I sit in bed with either a book, a notebook or I do a bit of blogging on my phone (SO MANY BLOGPOSTS PREPARED!). I have to raid the charity shops every week to make sure I don't run out of books to read!

Not having a TV or a constant WiFi connection definitely makes me feel a bit 'cut off' but Dave brought my stereo round, and a few CD's a couple of days after I moved in. However, by the time I got my own CD's and could listen to music I actually like, Charlie had broken it. I could still listen to the radio, but I absolutely despise it, and mostly choose to play my one and only vinyl record (Ed Sheeran, Divide) over and over again, much to Charlie's delight.

I even managed to get my unread emails down to zero for the first time in a year. The beauty of having limited WiFi, I don't get emails pinging in constantly so it's easier to go through them when I get the chance! Although, I have just bought myself a new sim card, with 4GB of data, so I'm feeling a bit less cut off now than I did a couple of days ago! Hopefully I won't go through it as quickly as I did my 100MB...

Also, I very much regretted not downloading more stuff to watch on Netflix the first time I went back to Folkestone for a couple of hours. I ended up watching To All The Boys I Loved Before three times in the same week because I had nothing else to watch. I absolutely love it though, so I am not complaining. I suddenly understood why everyone was tweeting about Peter Kavinsky. *dreamy sigh*. I was heartbroken when Netflix told me the download had expired, so I couldn't even watch that anymore! But I have since cancelled my Netflix subscription, so at least I can save myself a bit of money every month!
Thankfully Mum comes over for an hour every day before dinner (mostly so I can cook without Charlie interfering too much) and it's such a relief to have some company if my day is a quiet one. Although the hour goes past far too quickly! I do try to get out every day though, even if it's just a walk down to the canal to feed the ducks and swans, it stops me getting too wrapped up in my own thoughts. Plus, exercise and fresh air. Always a winner.

Money Management
I definitely feel like I'm managing my money better. I still spend too much, but so far I have definitely saved a significant amount of money being here, compared to a month back home. I don't actually have to pay the site fees until January, so I've been making a conscious effort to be more responsible with my money, in an effort to save up for January. It definitely helps that I now shop at Aldi rather than Tesco! I can't believe how much more I can get for my money now. Since August, I stopped buying Charlie baby and toddler meals, as he never really ate them. That saves me a ton of money, and he eats virtually the same as me now so less gets wasted. Don't feel like I'm throwing my money in the bin now! Well, maybe slightly less money, as he's taken to having one bite and then throwing the rest on the floor. He's currently on a diet of water, milk and yoghurts and it's stressing me out so much! But I know it won't last, thankfully.

I did spend more than I would have liked on kitting my caravan out, but to be fair, it was all stuff I needed. E.g. saucepans, cutlery and cooking utensils are all things I couldn't live without! Although I don't think I spent much more than £150 on everything, especially as Mum and Dave bought a few things for me like my gorgeous dining table, saucepans, tea towels and the beautiful sign pictured above. Everything new came from Aldi, B&M, the weekly market, Poundstretcher and Poundland! It took me ages to find the kind of tumblers I wanted though. I specifically wanted some tall, hi-ball glasses - preferably with a bit of colour but not necessary - and I just couldn't find them anywhere. But eventually, I did. Where? An Oxfam shop in town. Not coloured, but absolutely perfect. Four glasses for £1.99. I was completely made up, and glad I didn't have to settle for anything else! Honestly, I wouldn't have even thought of looking in charity shops for stuff like that, I usually only find books, or clothes and toys for Charlie, but Mum actually found them and pointed them out!

As for treating myself, I'm trying not to. Although I usually still find something I want and can't leave behind. But a majority of those items have become staples, like a pair of yoga trainers I use for long walks (they're sooo comfortable!) and a dressing gown for when it's freezing. I also try to limit unnecessary purchases for Charlie, but use his leftover birthday money for certain things!

When I did my first grocery shop, I literally bought the biggest bottles of washing up liquid and hand soap they had and I've barely used any! Considering I'm constantly washing up and washing my hands, there's hardly any soap missing, so it's going to take me a good few months to get through them! Shopping savvy isn't really as hard as it looks.

Another good thing here is that the electric bills are paid every two months, rather than on a monthly basis. This does mean that I still won't have 'extra' money every other month, but rather that I still have to save where I can to make sure I have the money ready for the next one.

One thing that does worry me is that I'm not going to save enough. My site fees (covers the ground my caravan is on, use of the pool, and clubhouse) are significantly higher than I expected when I bought the bloody thing, and now I am really worried about how much I'll actually have to live on once my rent is paid and my electric bill comes out. Like I said, I am saving where possible, but I don't know how well I'll be able to cover myself. Although, I don't have to buy anything else actually for my caravan, so that's some expenses I won't have to worry about this month!

Misc
So far, the nicest part of being here is Charlie having his own bedroom. He actually seems to love having his own space to play in; in the beginning he regularly picked up a couple toys from the front room and toddled off to his bedroom! He seems to sleep better too, there's been much longer stretches of uninterrupted sleep since we moved here, and he's much better at self-settling in his cot, rather than having to go to sleep in my bed first. Plus, I actually have a Charlie-free space all to myself and I love it. My bedroom here is considerably smaller than what I'm used to, but I have more space than ever! It also helps that everything I own (that didn't get decluttered) is now spaced out into four rooms, rather than squeezed into one. Although I've recently had to bring even more stuff over from Folkestone, which I'm struggling to find space for! I may have to have another decluttering session ASAP.
The worst part is the cold, and the constant tidying up. There's nobody else here to help me tidy up in the evenings and if I'm feeling unwell, it's a real ballache to get it done. If I'm feeling too bad I'll just clean Charlie's bottles and go to bed, but I hate waking up to mess in the morning. Why are housework fairies not really a thing?! I do feel quite proud though once it's all clean and tidy, it definitely makes me feel like I've got my shit together! Although of course it doesn't take long for my little monster to undo all of my hard work in the morning, but it's better to have to put it all away again than leave it out indefinitely.

I really do love it here, and so does Charlie. He loves the park, which we go to after he sees the ducks (he really, really loves the ducks) and he's constantly getting excited about the various doggies he sees on his walks. He especially loves seeing his Nana every day, though he still cries his eyes out when she leaves.

All the while I can afford it, I still think we're going to be very happy here. Although my depression is still a daily battle, I'm actually very content! Onwards and upwards from here, I think.
Labels: Life After a Hysterectomy Lifestyle