I can't believe it's been another three months since Charlie's last update; I swear I was only writing it last week! 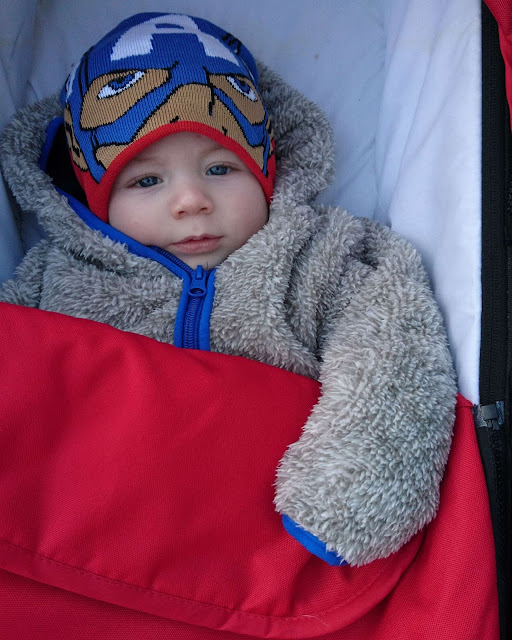 We started weaning him at four months. I didn't really want to but he was so ready! I didn't give him proper food every day though, as I wasn't convinced his tummy was fully ready for it, so it was more of a 'couple times a week' thing for a while. This did mean that he tried to steal everyone's food and drink though. He actually grabbed hold of my cup of tea within the first couple of weeks!

I thought he started saying 'Mum' just after turning 3 months, but just put it down to hearing what I wanted to hear. However, by the second week of December; three other people said they could have sworn he said Mum! I even managed to catch him saying it in a voice note to Gail! He also definitely says 'owww' when he has teething pains, it's so sad to hear! Oh yeah, he started teething for real at four months. That was horrendous at times. He was still a little cheeky chops, and generally happy though. 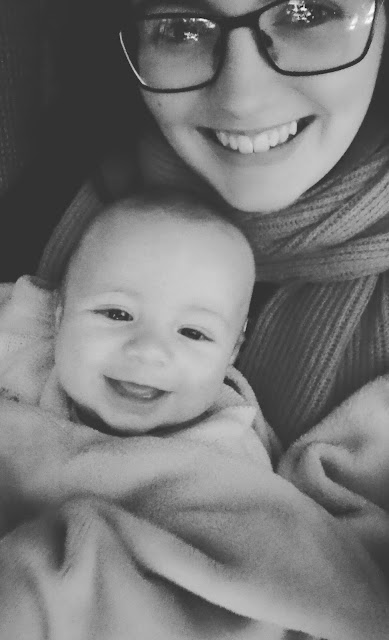 By 5 months he was clicking his tongue, blowing raspberries, sleeping on his side and attempting to roll over. He also finally managed to get his toes in his mouth, which pleased him greatly. On Christmas day (with Daddy's help) Charlie walked from my sisters hallway into her dining room. I'd seen him take steps before but not that many! Ash couldn't believe it. It was definitely the highlight of our Christmas.

My favourite habits of Charlies is the way he'll stroke my face after he's just woken up, rock himself when he's happy and hold my hand while he sleeps. My least favourite is the way he clamps his mouth shut when I need to give him medicine or teething gel!

Over the last month, Charlie decided to start sleeping on his side and it is a d o r a b l e. He also can't sleep if there's an artificial light on, which I think is down to me and I am so pleased. I used to have a little nightlight for him, but when he was around 6 weeks I had an email that said babies haven't developed a fear of the dark yet, so I immediately stopped using the nightlight. Ever since he's been perfectly happy to sleep in the dark, and when he's sleepy, he usually whinges until the light has been turned off. I'm definitely going to have to buy some blackout curtains for the summer.

He also finally cut his first tooth! He's literally been showing signs of teething since birth so I'm beyond pleased that he finally cut a tooth at the beginning of the year. Then two weeks later he cut another one! Charlie officially has his two bottom front teeth poking through and we're still not used to it.

At five and a half weeks I could finally see that Charlie was making a conscious effort to roll from front to back, rather than just doing it accidentally! He's also making an attempt to roll back to front but only gets halfway before giving up. But, Friday just gone, he finally managed it! So I'm in trouble now. He also keeps making some attempt to crawl, but seems happiest on his feet, so he might skip the crawling stage altogether. 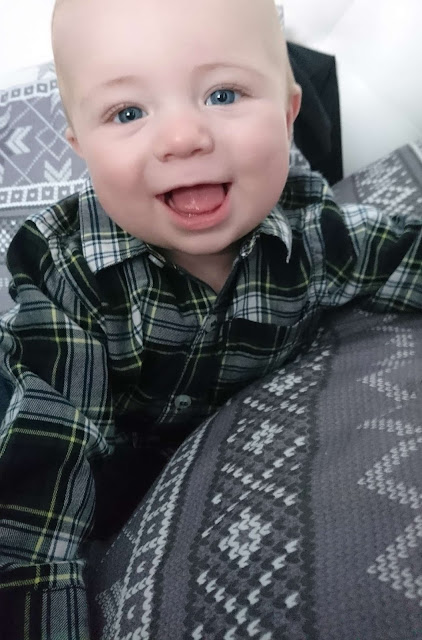 After several attempts and fails, I finally have Charlie in a bedtime routine. I'm still working on the morning routine. He has his dinner around 6pm (I haven't made any pureés yet, as he got lots of C&G jars for Christmas) and even starts crying for it if I forget the time! He usually has half a jar of food - although sometimes he wants the whole thing! - and occasionally a pudding (a fruit pouch, and occasionally a bit of chocolate). He doesn't really seem fussed by pudding though, he usually wants out of his highchair/bumbo by the time I have his pud ready. From there I get him changed for bed (I don't bath him daily, it's pointless) and at half seven it's "quiet time" to get him ready to sleep by half eight.

He usually has a few ounces of milk in this time too. I haven't quite got him into the habit of falling asleep in his cot yet, as months of co-sleeping is a hard habit to break, but he usually stays asleep once I transfer him into his cot. However, he only sleeps for an hour or so, so we go through quiet time again to try and get him back to sleep quickly. It doesn't usually work, as he's usually still awake as late as midnight, which absolutely kills me. But once he's back to sleep and in his cot, I know I have another four hours before he's awake for a feed again. Although he does have the annoying habit of dropping his dummy, crying for it, then dropping it again and crying...the first few nights of training him to sleep in his cot again were incredibly difficult and I gave up several times, but I'm determined to have him sleeping in his cot full time by his first birthday. He's already making great progress, so I'm confident it will happen long before then. I just need him to fall asleep in his cot and not wake up after nine! If anyone has any suggestions about that, please let me know! 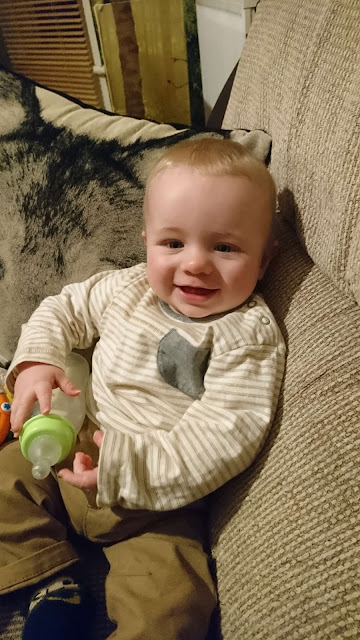 Charlie has mastered the fake laugh. I think he started doing it around three months but this month it's been absolute perfection. His timing is brilliant sometimes. I've always said he's been practicing for when his Dad cracks jokes. Ash doesn't appreciate that. He's also taken great delight in playing with his shadow when he gets the chance; it's so cute!

When we started weaning, I used to try and give him breakfast but he never really wanted it. So I switched to the opposite end of the day and gave him dinner, and he much preferred that. But over the course of this month, he seemed to be ready for food at lunch too. Instead, I started giving him a snack (either porridge or a bit of fruit pouch) at around 3pm which went down well. Mum usually gave him half a rusk to keep him quiet in the morning so I could have my breakfast in peace but he still wasn't ready for a real breakfast. But no doubt that will change within the next couple of weeks.
It's crazy really, to think he can eat as much as he does already. Not going to lie, I'm a bit worried about what the Health Visitor is going to say this week but if the kid wants food, the kid gets food! I haven't started him on baby led weaning yet, I'm not prepared for the mess he'll make. But I'm sure it won't be long. 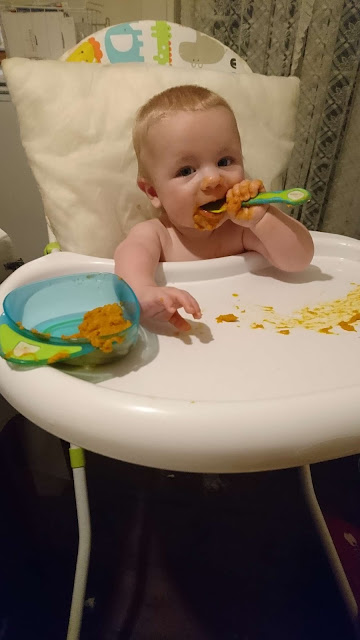 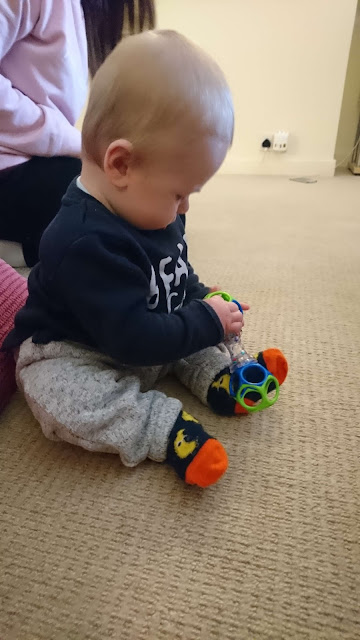 Oh! As well as saying Mum (still only when he cries) he can now say Nana, Dad, No and I'm pretty sure he tries to say hi/hiya too! He usually waves while saying it, and even attempts to clap! I'm so proud of my gorgeous boy, it's amazing to see him progress so well. But at the same time; Charlie please stop growing?!
Labels: Baby Diaries