Well, February has certainly been an interesting month. I welcomed two new babies this month! My niece from Joshs sister, and Charlie's baby brother from his Dad and his girlfriend! Charlie is so excited about being a big brother and I'm loving having another niece to spoil. Unfortunately, in the same week, we also had to say goodbye to Charlie's Great Nan on his Dads side. I didn't get to see her so often anymore but it's so weird to think she isn't around anymore! 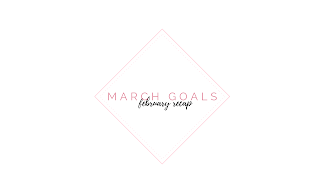 Once again, I started to go off the texture of meat in February - sandwich meat in particular - so I started to look for alternatives. My current go-to is Quorn smokey ham and philadelphia in wraps or seeded bagels, or carrot and coriander soup! I am also quite partial to the McPlant burger. I was really tempted to start an Allplants subscription but over £40 for only a weeks worth of dinners seemed a bit spenny when I can get vegan microwave meals from ASDA for £2.50-ish a pop...
I've been happily binge watching Bones the last few weeks. It's rare that a TV show can keep my attention so well but I absolutely adore the show and the relationships between all of the characters. I love Brennan but I find Angela the most relatable!
Charlie spent the entire half term away at my Mums. It was so weird to be without him for that long! All because I couldn't get any time off work to spend with him. I have to admit though, it was quite nice not having a small child to deal with on top of a rough week at work. I missed him so much though, I'm so glad we're going on holiday during the Easter break!
I have also been running a giveaway on my Blogger Nation account! The winner was Ali, lifestyle blogger from Ali's Upside Down World and they won a £10 Amazon gift card and advertising on my blog and Ellie's Little World blog for March!
Work Life
This month at work, I started to run shifts on my own! I was absolutely terrified - I've only been there two months - but thankfully any shifts I've run have gone relatively smoothly and I've had a strong team to work with. The team are always singing my praises and my managers are happy with me so at least I'm doing something right! I have been very stressed from it though, and have been considering quitting. I feel like I need a good chat with a manager and I may be okay to stay. We'll see!
I've been slowly but surely making my way through some online courses for work. They take forever and are an absolute pain in my butt but I'm pleased to say I passed all 12 with flying colours!
I had to call in sick for the first time this month. I was brewing myself a cup of tea and feeding the cats when one of them decided to jump up on the counter and she knocked my tea flying! Queue the worst pain I've ever felt in my life as my poor foot was scalded by the boiling hot water. Not to mention one of my favourite mugs being smashed to smithereens! I spent the rest of the day in bed, trying not to cry. Thankfully it wasn't bad enough for me to go to A&E and my first aid training meant I could deal with it appropriately at home, but I did have to bandage up for a week so I could wear shoes and go to work!
February Goals
Between working, watching Bones and doing online courses, I didn't really have the time to blog more or read a book! I'm a bit disappointed about that but as I've still been finding joy with Bones, I can't really complain too much. I also didn't celebrate Imbolc as planned and wasn't home to change my altar but I did just about see in Imbolc this year!
Unfortunately I couldn't convince myself to do any yoga this month. I did keep trying to find a yoga routine to do but I ended up getting overwhelmed by the options and didn't do any at all! I've decided to look into apps for yoga instead of Youtube.
As for my Low Spend month, I will be writing a full blog post about it!
March Goals
Look after myself
In February I spent a lot of time keeping care of my nails, using almond oil on them, keeping them neat and painted. It's made me feel really good about myself and I really want to continue in March! I also want to make more effort with my appearance at work. Although I have to be careful with what I wear, I occasionally "dress up" a bit and do my hair nice and wear chokers and I feel really good! I definitely need to up my face mask, moisturising socks and body moisturiser use though. Also, I need to stay hydrated!
Do yoga once a week
I have installed the Yoga for Beginners app which has created a plan based on my needs, weight and height. It's a 30 day programme but unless I have spare time, I will stick to once a week to begin with. Ideally I'd like to do it in the mornings, so I'll have to work it around my shifts!
Declutter
Yup, attempting a declutter for the third month running.
Another Low Spend month
I really enjoyed trying to stick to my budget this month! Although I do need to book in with the opticians in March, so I definitely need to factor in some costs.
What are your goals for March?
Until next time,
Saph x